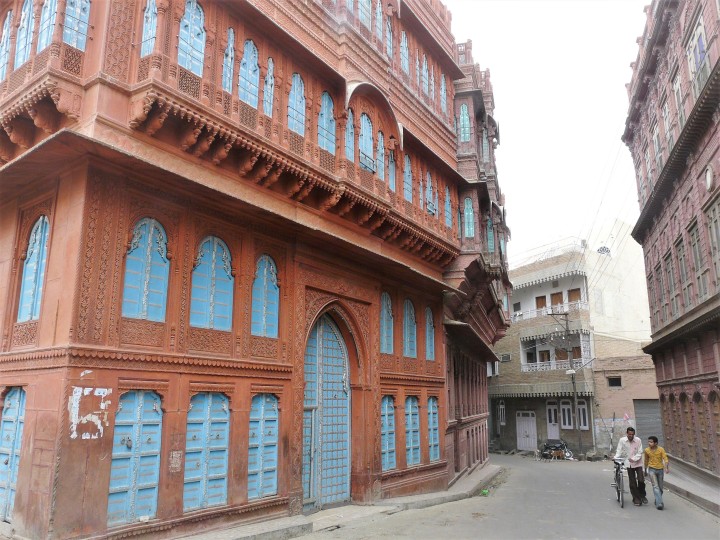 Shekhawati is a landscape of narrow country roads, half forgotten villages and beautiful havelis. (large ornate traditional houses). Crops of bright green mustard seeds, wheat and cauliflower interlaced with sandy tracks, ornate yellow sandstone wells and crumbling cenotaphs. An open air painting of shifting colour and light. Once an area on the silk trade route between the ports of the Arabian Sea and the Ganges Valley, the wealthy Shekhawati ‘thakurs’ (noblemen) were able to build fantastic residences, decorated from top to bottom with frescos. The paintings depict Hindu gods, portraits of local dignitaries and maharajas, scenes of everday life, and the latest inventions of the time. Often the artists had never seen the wonders they were painting and imagination had free rein – mythology and modernity combined to give real images. Personal favourites included Krishna flying an areoplane and a locomotive depicted as an iron elephant complete with steam blowing from the top of his head! 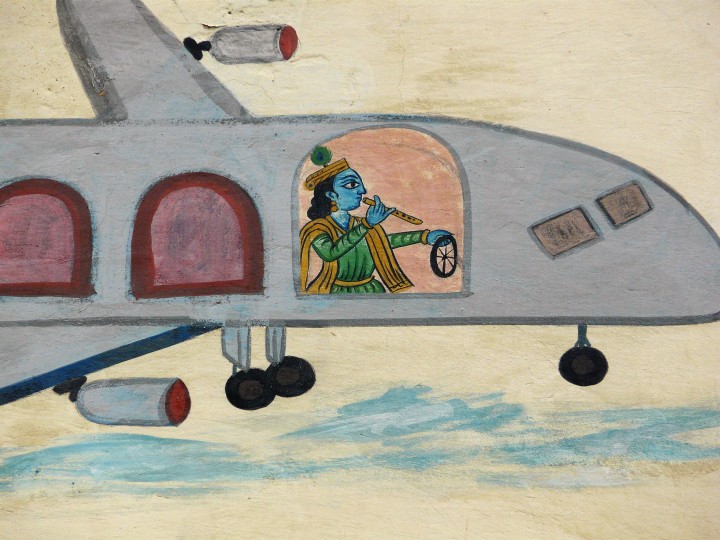 Sadly, many of the havelis are now in a state of decay. The average Indian has more pressing concerns than the protection of their heritage and history. Some of the havelis are empty – wealthy owners have no wish to live in a small town backwater – deteriorating bit by bit, overrun by pigeons, a mass of feathers, shit, broken glass and wood. Ignorance and negligence means the buildings are treated without respect. Electrical wires hang over frescos, power boxes are tacked into the middle of artworks, and posters are glued over dancing gopis (Krishna’s milkmaids). Some of the houses are inhabited by caretakers. Families live rent free and go about the day to day business of living in return for keeping an eye on the old mansions. Strange to see women cooking and using old fashioned twin-tub washing machines in what amounted to a museum setting!

One man is trying to reverse this trend of neglect. Mr. Ramesh Jangid is president of the “Les Amis du Shekhawati” – an organisation aiming to preserve the havelis. He runs conscious raising classes for local schoolkids encouraging them to be proud of their local area; with drawing lessons and competitions. Kids are tested on comprehension. Drawings are sold as cards to tourists. Painting workshops are held so the old craft doesn’t die out.

Mr. Jangid has gone further and is also the owner of Apani Dhani – an award winning, ground-breaking ecological resort – hoping to give tourists an insight into the local culture and way of life, Apani Dhani also works towards better social and economic local development. We stayed in hut built with traditional Rajasthan features. The walls were made from clay bricks and the roof was thatched with pampas straw. Solar power provided electricity and heated the water. Guests were encouraged to bathe in the traditional Indian way with ‘bucket and mug’. Rajasthan is a desert area and water is scarce. The water level is at 80m and is falling at the rate of 1m per year. With the ‘bucket and mug’ method, the bather first wets the body, taking water from the bucket with the mug. After a liberal soaping, the body is rinsed clean, always dipping the mug into the bucket – this way the water in the bucket stays clean and any left over can be used for something else. Taking a shower with running water requires up to 2 or 3 times more water. Apani Dhani also grows it’s own food, and serves great (spicy) traditional Rajasthani cuisine – made fresh by the women of the family every day. We followed a cooking lesson and tried our hand at making chapatis. Great fun when they puff up and fill with air. Mine was a bit thick but still tasted good! 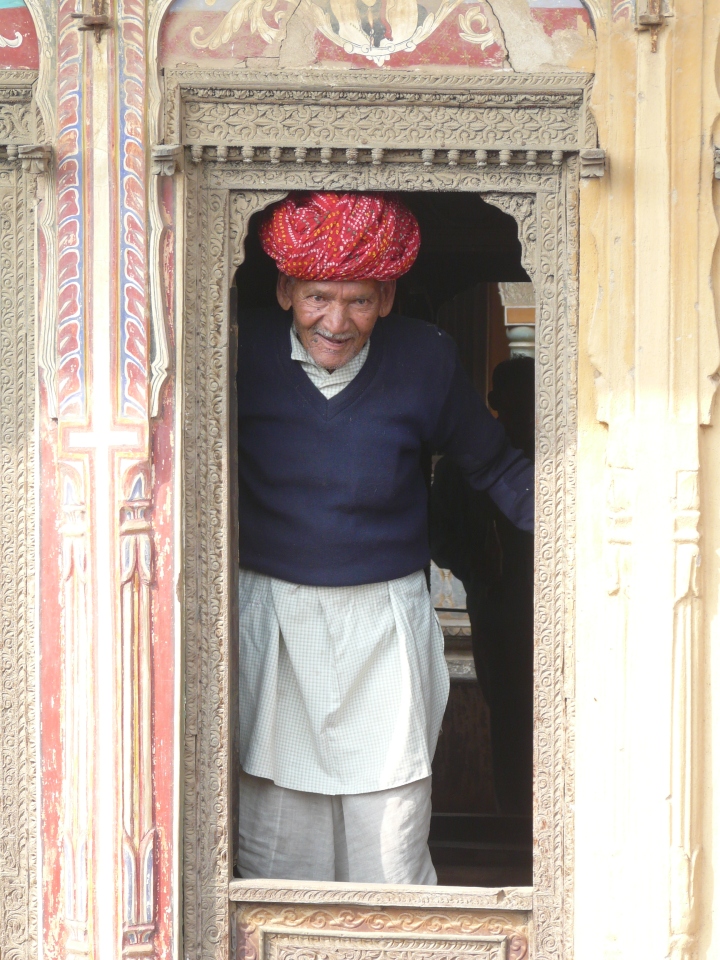 We went on a camel cart ride in the countryside, visited a farm and had a cup of chai with the farmer and his family. (I was the only woman in the gathering!). We had a local musician come and play for us – amazing classical singing and harmonium playing. Best of all, we enjoyed the hospitality of people and the peace of the countryside.

6 thoughts on “Shekhawati: An Outdoor Gallery.”