In the past I’ve taken Parmesan – sorry I mean Parmigiano Reggiano – Parmesan is its inferior imposter – for granted. I always thought of it as a crumbly bit of old cheese, something to grate over my pasta, nothing more. It never occurred to me to eat it by itself, for itself. All of these – what I now see were strange – ideas changed after our visit to a master cheesemaker in Parma.

We were kitted out with blue plastic overshoes and nerdy white hair-nets and Matteo, the cheese-maker’s son, led us from farm-shop to cheese-house. It was modern, with gleaming copper vats, pipes and machinery, but it was also a tiny two-man operation; and it was plain to see that it required strength and stamina. The master stirred the milk mixture with a huge wooden paddle, peering into the mix over the top of his glasses, testing, checking, waiting – for what?

Making Parmigiano Reggiano is a simple process, but like all simple things it’s quite complicated. It’s completely natural, and everything is controlled – from what the cows eat, when they are milked and when the milk is delivered to the cheesemaker. It takes a whopping fourteen litres of milk to make one kilo of Parmigiano Reggiano. And those great big wheels of the stuff that you see in shop windows? – there’s an incredible five hundred and fifty litres of milk in each one.

The milk from the evening milking is poured into holding basins. The separation of the cream takes place naturally overnight and this partly-skimmed milk is mixed with the whole milk from the morning milking. The milk is then warmed and the whey added. Rennet is added to curdle the milk and this curdled milk is broken down into small granules with a giant balloon whisk. The heat is controlled to expel water from the granules and is then shut off so that the granules sink to the bottom. They are joining together to become cheese. It’s technical stuff, but it’s the skill of the cheesemaker that makes it all come together. 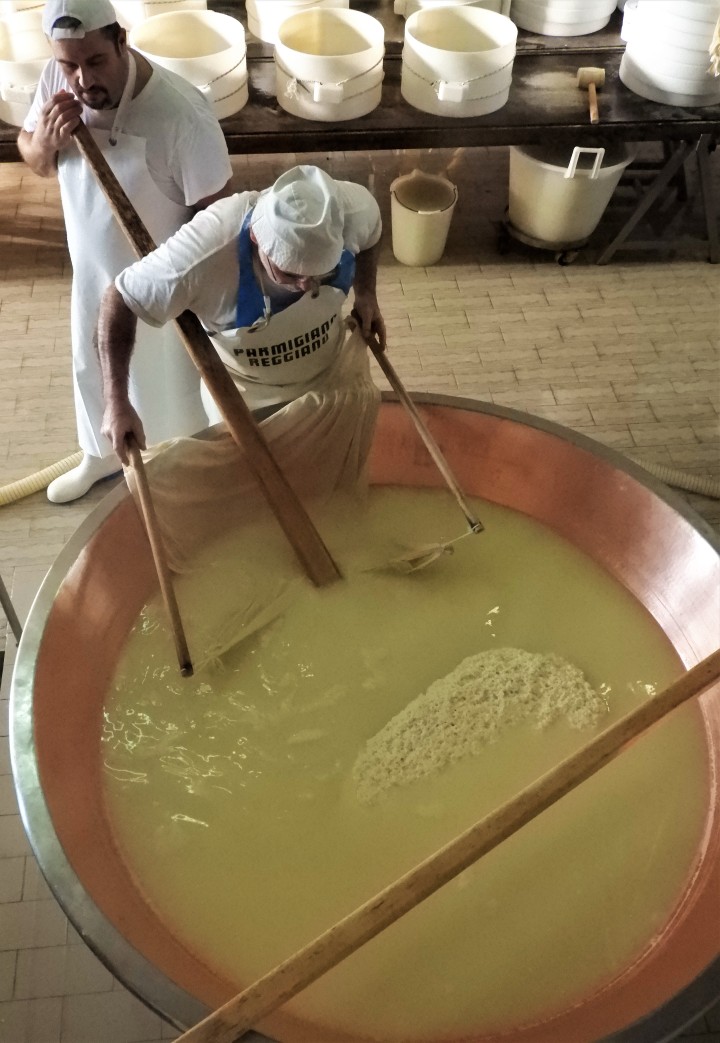 This is where we came in. That’s what the master was waiting for. Cheese! Timing is crucial. The cheese is lifted from the bottom of the vat, and man-handled by both cheesemakers into a linen cloth, which is hung from a pole over the vat. The remainder of the milk is not wasted, but fattens the pigs that will eventually become Parma ham.

Six times the cheesemakers bought the cheese from the depths – the vats were huge – and swum them into the linen. While the cheese dripped we were taken to the salting room where wheels of cheese floated in their own Dead Sea, imbibing salt. But we were back in time to see the cheese being lifted out of the vats – by machine, but manoeuvred by the men into round plastic moulds. The master scratched his head, consulted a log, peered over his glasses again and marked the cheese. After two or three days the cheese is moved from mould to salt bath, where it’s turned every day by hand, by the cheese maker. And then, finally, the wheel is ready to be aged. 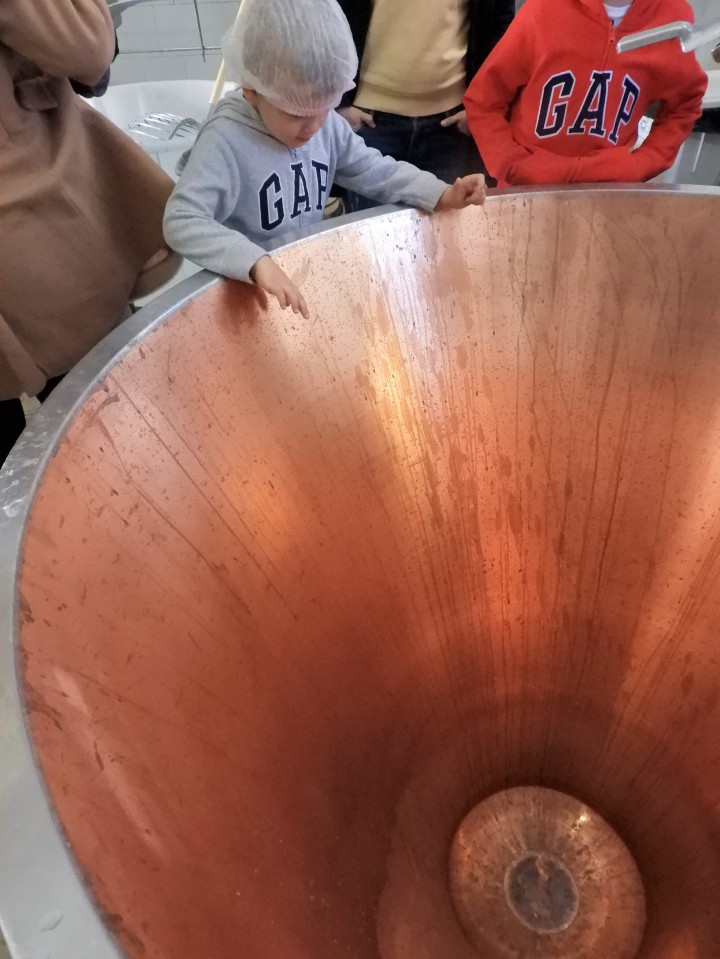 The smell hit us. Wood and the tang of cheese. And the sight knocked us back. Row upon row, shelf upon shelf – just cheese. ‘Are you a cheese-maker as well?’, I asked Matteo. ‘This job is not for everyone’, he told me. ‘You have to have passion to make this cheese. My father has done this for forty years. He hasn’t had a day off since 1998. No Christmas. No holiday’. ‘What if he’s sick?’, I asked. ‘He works’, was the simple answer. Nor is the cheese-maker the owner of the cheese. He’s contracted on a yearly basis by the owners of the cows. Job security is minimal. ‘It’s a very strange thing’, said Matteo, looking almost as confounded as I felt. It’s not surprising that such small-scale farms are dying out; there are perhaps fifteen or sixteen in the Parma region, out of a total of eighty operations. 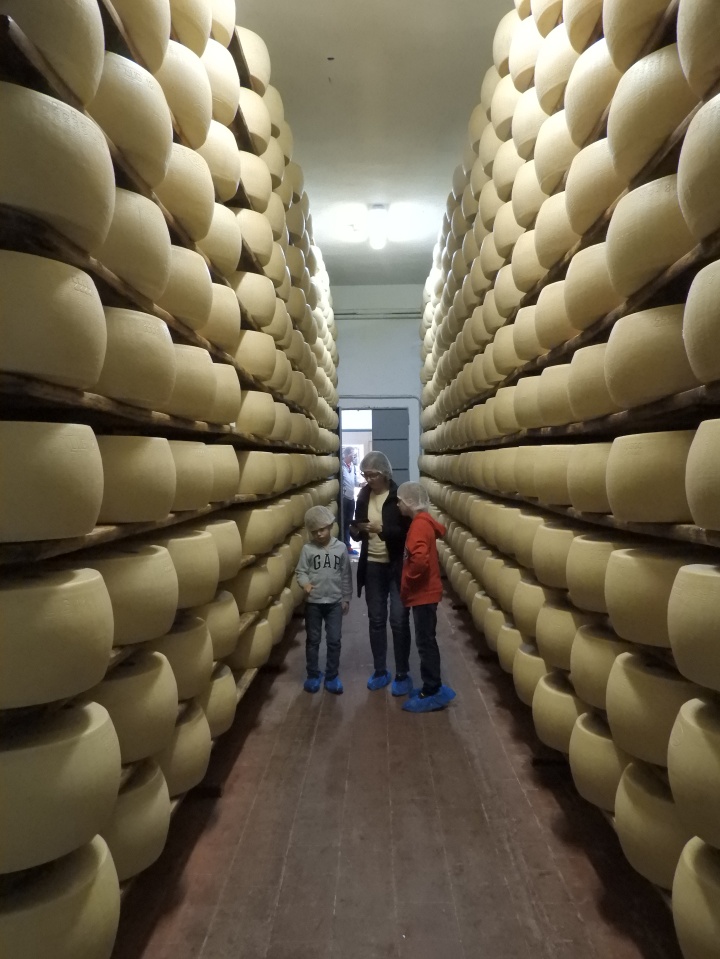 I glanced around again. Wheels of Parmigiano Reggiano stacked from floor to ceiling. During the ageing process, the cheese is dusted every ten days. Each one, individually – taken from shelf to machine and back again. Each wheel weighs around forty kilos. This task alone takes the two cheese-makers nine hours! After twelve months the wheels are evaluated by an expert, who studies appearance, structure and various characteristics. Perfect cheeses are aged further, the others are sold to be eaten ‘young’.

‘Why does your father do it?’, I asked. ‘He likes Parmigiano cheese’, Matteo shrugged. But I began to understand. What I had though of as a ‘crumbly bit of cheese’ was one man’s blood, sweat and tears; years of experience, patience, love and learning -a whole lifetime condensed into each and every cheese. As Matteo said, ‘You have to have passion to make this cheese’.

12 thoughts on “Blessed Are The Cheesemakers.”