If there’s one thing that the people of Modena like more than opera music, it’s food. Enrico, our Airbnb host, left us two pieces of information – one entitled ‘cosa mangiare’ and the other a list of noteworthy restaurants. A man after my own heart.

Figuring we’d diet later, we wondered through arcades and ancient streets to pretty piazzas stuffing our faces, satisfying our stomachs and licking our fingers.

We started at breakfast with Gnocco Fritto, puffed up parcels, pockets of air, bubble-encased dough, light, hot and fluffy. A pretty version of fried bread. My basket was served with lashings of meat – salami, prosciutto and mortadella. At my first tasting, at a cafe in the centre, the fritta were slightly greasy. A local speciality that I wouldn’t rush to try again. It was only when we were sitting at the Casa della Gnocchi Fritta and the lady placed an un-asked for plate of the pockets in front of us with such pride and pleasure and the words, ‘It’s special to the area – please’ that I realised how good they could be. Dedication makes everything taste wonderful.

From meat and fried dough breakfasts we moved seamlessly to pasta lunches. Bologna and Modena both claim ownership of tortellini – created in honour of Venus’s belly button, when an innkeeper happened to spy her through a keyhole. In an act of passion he then dashed to the kitchen and created the tortellino; plump pasta pockets stuffed with carefully minced meats, and a secret selection of herbs and spices. Our favourite filling was pumpkin, sweet and sticky, littered with amaretti cookie crumbs. 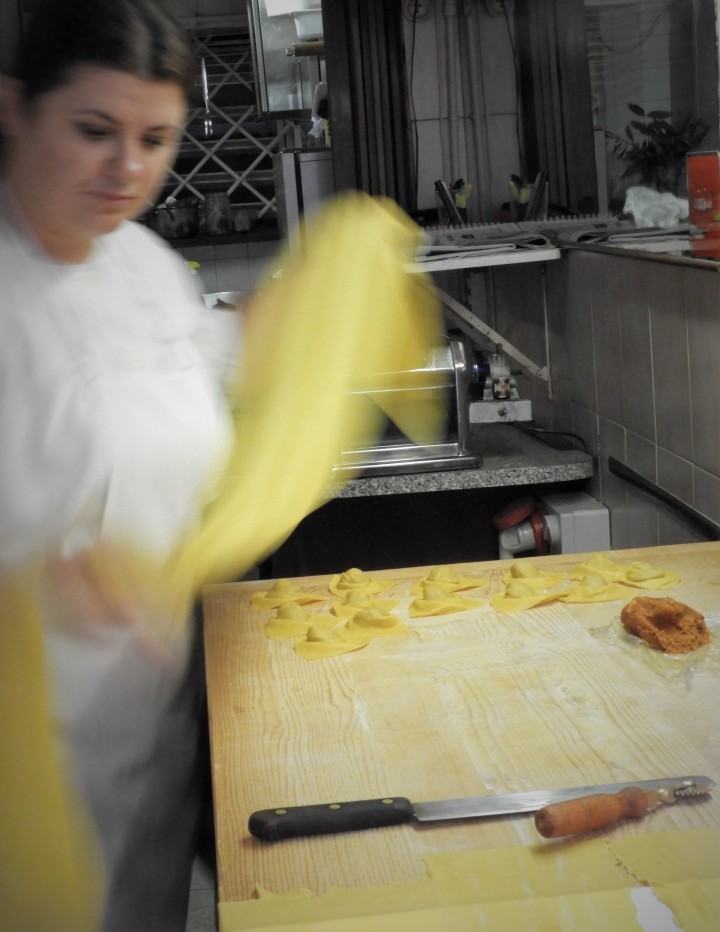 In Modena, pasta and Lambrusco go together like parmesan and balsamico. As the lady at Ermes plonked down a bottle and a few slices of sausage, she said ‘I’ll put more people on your table if it gets busy’. Within minutes we were joined by two men on a business lunch. ‘They speak English’, said the waitress, as she disappeared again. Over baked pasta, pork and chicken, cake and espresso we laughed a lot. ‘Did you try nocino?’, asked our Italian companion ‘Oh you must!’ (Enrico had neglected to put this on his list) and he summoned the host. I was given a generous glass. A walnut liqueur – 40% proof – it was smooth, and went down too easy. Our new found-friends knocked back shots and I couldn’t believe that they were going back to work. The nocino recommender leaned forwards; ‘We are’, and he leaned a bit closer, ‘but we are not going to do anything’!

Another day, another lunch – at Franceschetta 58, the baby brother of one of the world’s best restaurants, the three-Michelin-starred Osteria Francescana. The food was good but not knock-your-socks-off good. But an upmarket version of Zuppa Inglese hit the spot. We’d spotted it first in the Albinelli Market – gaudy dollops of pink-splattered cake. Apparently the sixteenth-century rulers of Ferrara asked their cooks to recreate the English trifle they’d enjoyed at the Elizabethan court, where they were frequent visitors. Sponge layers laced with rum, topped with cream and meringue. Mmm.

Somehow we occasionally made room for dolce in the afternoon. At the Anticca Pasticceria San Biagio I fondly imagined we’d sit down for a slice of cake and a cappuccino. Torta Barozzi was on the CM list. I was surprised when the girl reached to a shelf behind her to grab a cellophane-wrapped box and reeled off weights and prices – the cheapest of which was Euro 25! ‘Is it a cake?’, I asked, just to be sure. We took the plunge and took it home to sit on our balcony with a good old English cuppa. It was a bit of a sorry-looking thing, a thin flat slice, spongy on the inside and flaky on the outside. ‘It’s just like a brownie’, said Jim. I could taste peanut behind the chocolate but we were less enraptured than Michele Serra, who describes the torta thus: 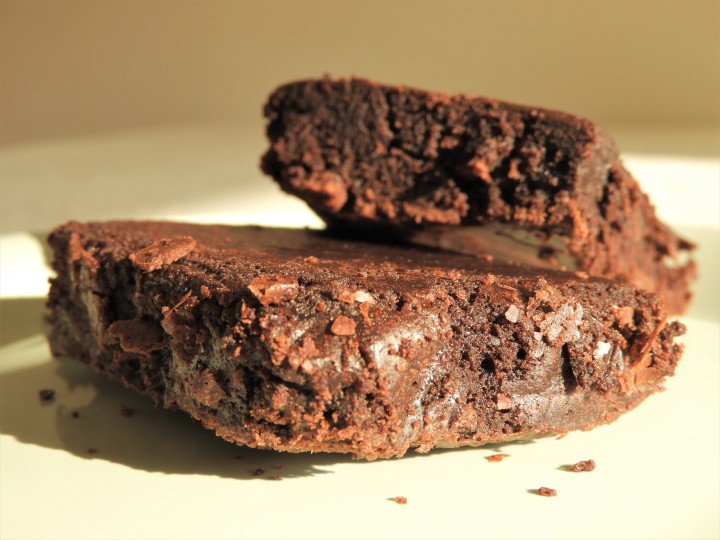 ‘To describe Torta Barozzi you should be at least Tolstoj, I apologize with the torta if I am not worthy. It looks like a small clod and as a clod it crumbles. It is a charming mystery made up thousand flavours that confuse the palate in a symphony of sweetness…’

We agreed on the clod part at least, and whenever we ate a piece Jim grumbled ‘World’s most expensive brownie’….

I was sorry to leave Modena, but maybe it was for the best. My waistline couldn’t have taken much more!

Casa della Gnocchi Fritta, Via Bellaria 310. Outside the city, at the bus stop/drop off point for Pavarotti’s house.

Trattoria Da Omer, Via Torre 33. The lady makes fresh pasta at the front of the restaurant.

Osteria Ermes, Via Ganaceto 89. No menu but there are a couple of choices for the first plate and maybe 4 or 5 choices for the second. A bottle of wine is placed on the table and the price includes wine and water. Total price Euro 35 for two.

14 thoughts on “Cosa Mangiare a Modena.”