We have just completed a house-sitting in the delightfully named Buntingford – it’s as if the flags are always out, and the town is in a permanent state of excitement – but, in spite of it’s name, we were not looking forward to our visit.

Previously, Sophie and Bobby, our two Labrador charges, lived in the New Forest. (Out of Season. Out of Time.) When we agreed to the sit we were envisaging ponies and woody walks in the mornings and seashore strolls in the afternoon. Buntingford however, is near Stevenage and we could think only of suburban sprawl. ‘Middle England, middle class, middle brow, mediocre’, moaned Jim. But we thought we’d get on with it. We’d agreed to the sit, it was only for three weeks – how bad could it be? 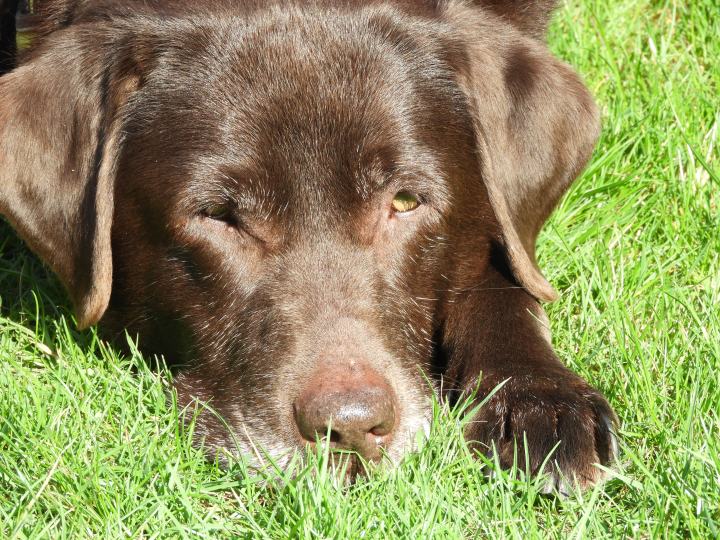 And Buntingford surpassed all our expectations. (Not that we had any). It was villagey and pretty. A river ran through it. The Rib. Meandering lazily under red brick bridges and over a ford, where local kids lingered in squealing groups. A triangular warning sign alerted of ducks crossing. They quacked and upended themselves in the sometimes fast flowing water and mums and toddlers threw them bread.

After the ford, a handful of houses and the school, the town receded, and we walked on open fields and quiet lanes. A mass of mud and water. (It rained for the first two weeks). Most mornings we’d meet an old lady, trailing a polythene sack. She threw breadcrumbs and seeds for the birds, a Hansel and Gretel trail leading to the allotments through a copse. She’d tell us about dogs she’d owned and always threw a biscuit for our two. This was not enough to deter Sophie from trying to gobble up as many breadcrumbs as possible. Past daffodils, up to the church in Layston, with a pretty little graveyard; primroses and rabbits, and an antique lawn mower, bearing a scribbled note – ‘please put back here’. 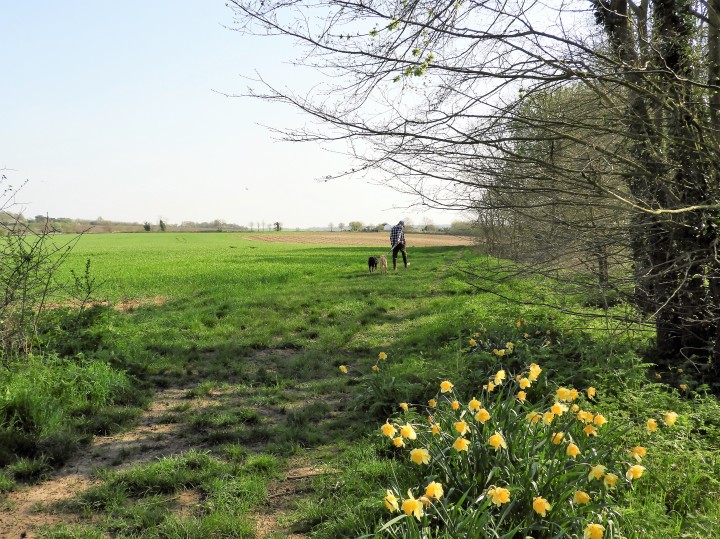 And then we’d hit serious mud. Slipping, sliding kind of mud. Jim fell over once, and I’m sure I saw Sophie laughing behind one of her paws. But this track led to the alpacas! Comical creatures, look-a-like, seventies rejects, with woolly leg warmers, stocky bodies, and a strange high pitched whiny; always curious, they’d peer at us, and once or twice they came close to the fence; until Sophie barked, and they fled. 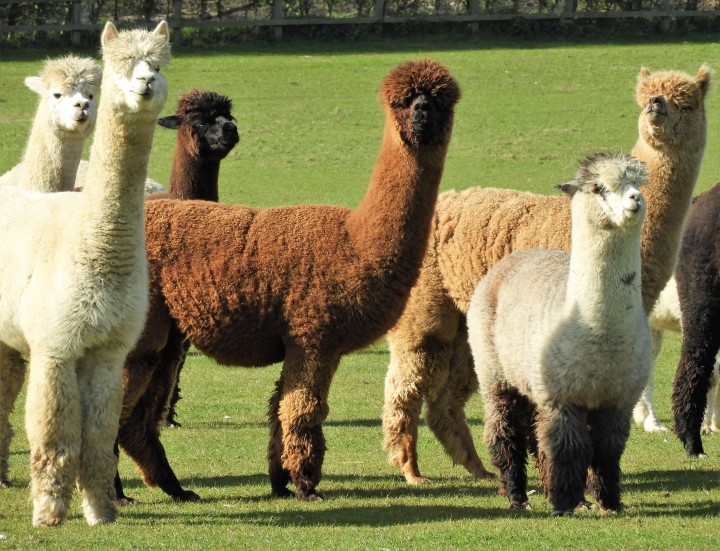 In the afternoons we’d walk along the Rib to the local park. Pretty, but for the litter left behind by teenagers, conglomerating in the wooden pavilion. And then back along the High Street, quaint beyond measure. Timber-framed buildings and a plethora of places to eat. Sophie always lingered by the kebab house, sniffing furiously and sometimes licking the pavement. 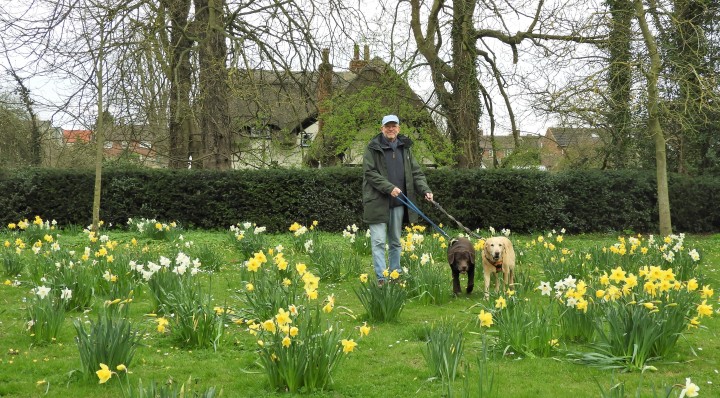 Bobby does not get much of a mention in this post, because he was just so good. Always plodding along as fast as his arthritis would allow, minding his own business, gentle and quiet. The dogs had only lived in Buntingford for seven weeks, but we joked that Sophie was already getting a reputation. There was a long list of things she didn’t like – scooters, (in fact anything with rattling wheels), Westies, cats, and cyclists. All of these things would cause her to bark – and she had a wonderful, deep, throaty bark – a real, ‘jump out of your skin’ dog’s bark – and lurch forwards, so that my shoulder felt like it was being pulled out of it’s socket. One schoolboy put his hand on his heart, and said ‘blimey, she scared me to death’. I hardly had time to respond as Sophie just surged on.

The joy of any sit is just hanging out with the animals and being locals. Buntingford also had ‘The Cheese Plate’, a cheese shop extraordinaire, run by Toby Archer, who once had a job in plastic injection mouldings, but then one day decided to start a cheese shop. Toby went from knowing nothing about cheese to becoming one of the judges at the world cheese awards. The shop sells over 280 kinds – the smell alone is divine. We sat at window stools eating posh cheese on toast ( a name which by no means does the dish justice) watching the owner of the bridal shop opposite arrange and rearrange a gown, flouncing, puffing, spreading a dress until it was just so, and then draping a veil over a headless mannequin.

And when we’d had our fill of cheese we toddled off to the Buntingford Coffee Shop, sometimes for a slice of cake, always for a large latte. Large windows allowed us to look out onto the High Street, where nothing much happened, but it was all very pleasant.

Middle England indeed, but not mediocre.