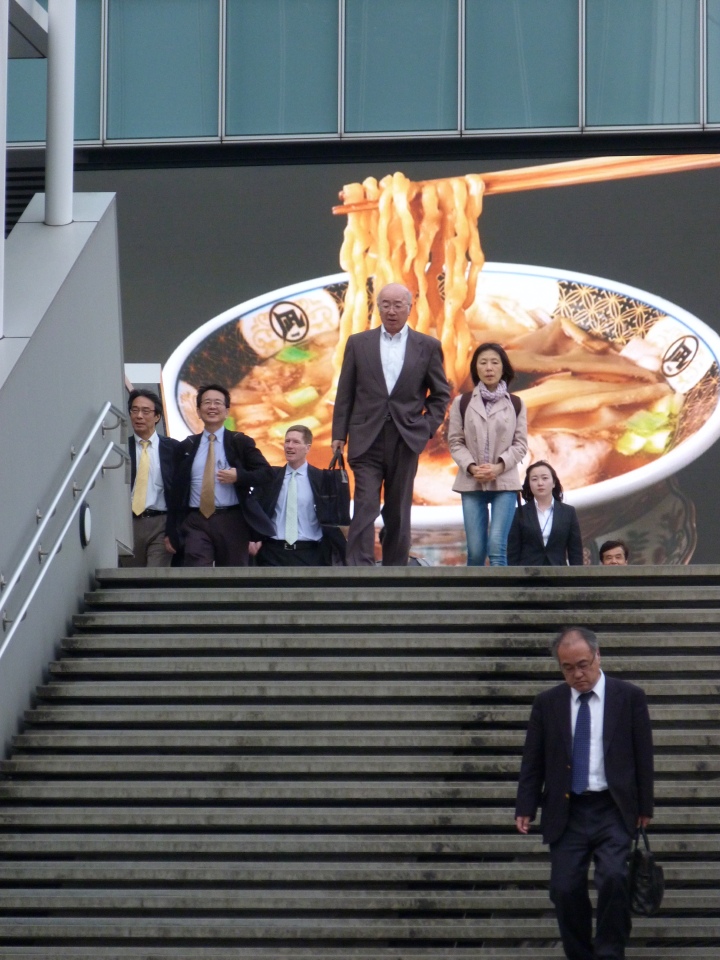 Eating Out in Tokyo.

There are shops selling them on nearly every corner. Movies have been made about them. They’ve got Michelin stars. There are even museums dedicated to them. Jim could eat them for breakfast, lunch and dinner. I’m talking noodles.

Noodles – simple bowls full of goodness – seem quite complicated to me. There’s such a lot of choice. Ramen, udon, soba…

At many noodle shops you buy a ticket from a machine at the front. Sometimes there are pictures, sometimes not. On our first attempt at this we were handed a menu with pictures, but it seemed to bear no relation to what was offered on the machine – even the lady behind the counter had trouble finding it. Beckoning, she motioned that we should put our money into the slot, and then our tickets were handed to the cook behind the counter. Our meal was ready almost before we had time to sit on our stools. Great, stomach filling, steaming bowls.

Ramen seems to be all about the broth. There’s shoyu or soy sauce based basic broth. The standard. Shio – salt, which is lighter, and goes well with chicken, seafood and citrus flavours. Miso. And tonkotsu – which is an art unto itself. Secret recipe soup, made with pork belly and bones and simmered for hours with added miso, sake, vegetables and who knows what else.

You can order extra toppings for your ramen – usually extra roasted pork slices, green spring onions, or a soft boiled egg. Sometimes even a raw egg. I was puzzled when I ordered a bowl of our daily favourite and was given an egg in a dish of it’s own before the noodles arrived. ‘What am I supposed to do with that’, I thought and it sat in it’s little dish while I ate away. I watched a man on the next table break his egg, give it a quick stir with his chopsticks and pour it into his noodles. Often a flat square of pressed dry seaweed sits atop the noodles.

If you’re really hungry you can ask for oomori, a larger helping (but then you’d have to be really hungry) or katedama, a top up, if you’ve finished your noodles and still have soup left over.

A variety of soup though is only the half of it. There are also different noodles. Udon are soft, thick chewy noodles made from wheat. Soba, or buckwheat noodles, can be eaten hot in winter or cold in summer with a dipping sauce and vegetable garnish. There are also noodles that are never eaten in broth. Yakisoba. Which despite their name are not made from buckwehat. (Told you it was confusing). Yakisoba are fried, mixed with meat and/or veggies and topped with ginger. When we’re not eating ramen out at lunch, I make yakisoba in the evenings for dinner.

And when you’ve finally made it through this minefield – you’re stuck with the difficulty of eating the things. Slurping is OK! The noise in a noodle bar can be quite off-putting. But – how do they do it? They’re so hot! and besides, I just get a broth bath when I try – they fall back into the soup and splash me, the counter and anything else near by. Eating noodles is also a fast and furious business. Your seat is needed for the next salary man. Slurp away. Pick up the bowl and drink the soup (like a giant cup of coffee) and be on your way. Five minutes tops. Now I have the knack of lifting some noodles out of the bowl with chopsticks, resting them on the spoon, and feeding them into my mouth from there (the spoon is a shield, less splash!) But still, I haven’t got the hang of slurping. 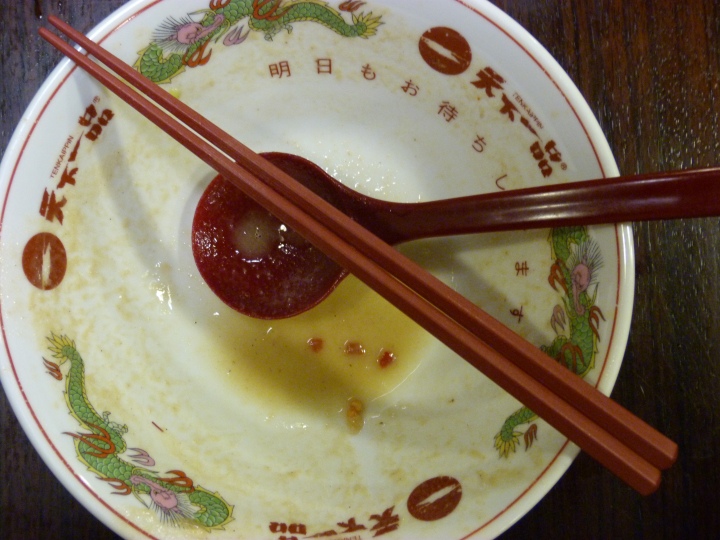 I’m enjoying the practice though!