Ask almost any Tokyoite and they’ll tell you ‘I’m not religious’. ‘Don’t ask me if I’m Shinto or Buddhist. I’ll be very embarrassed’, said our guide in Asakusa. But shrines and temples litter the city – they are everywhere, in the corners of car parks, on busy streets, down alleys, surrounded by high towers and modern buildings; we come across them in the most unlikely places. Most are quiet, peaceful spots but there is always someone there – or wait five minutes and there will be. Dark-suited “salary men” ring bells. Little old ladies clap hands. Anyone and everyone pops in, to offer a coin, pray for a moment, bow and pass on. It seems to be a part of every-day life, and isn’t something that requires thinking about, it just is– which is probably why most people claim ‘I’m not religious’. And why they surely are. I guess it all comes down to your definition of religion.

Temples and shrines are varied and many. At ZoJo-Ji temple, red woolly hats and cloth aprons keep row upon row of little stone figures warm. They are the spiritual guardians of both living and dead children. 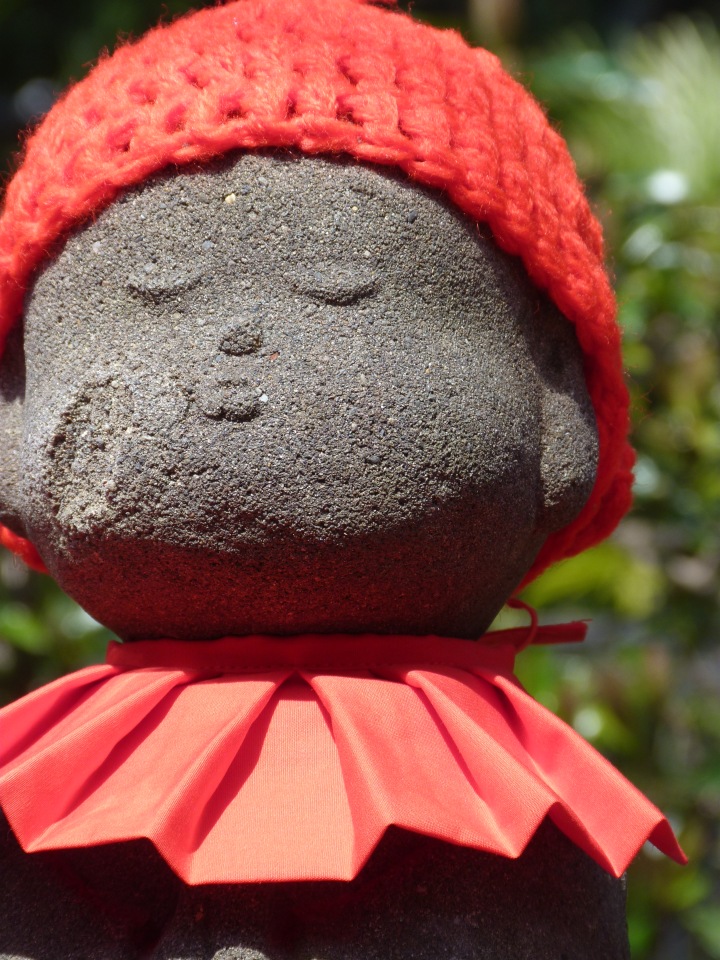 At Suitengu shrine, couples pray for the birth of a healthy baby and a safe delivery. Dogs are considered to be the guardian deities of safe delivery as they often have many puppies quite easily. 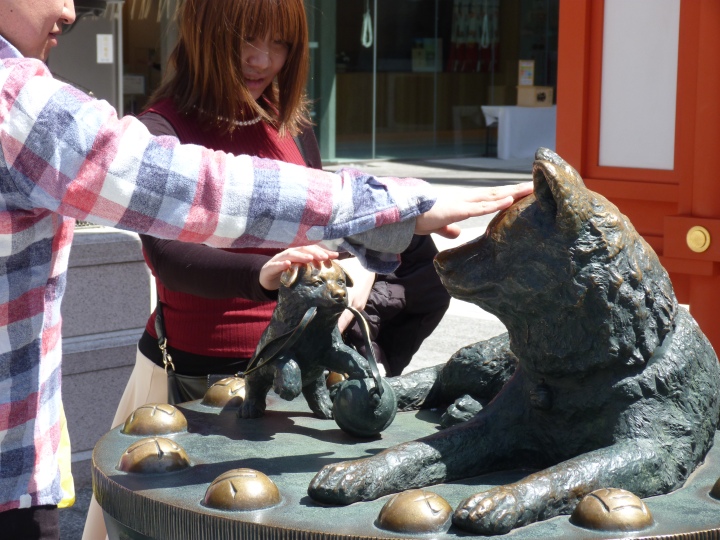 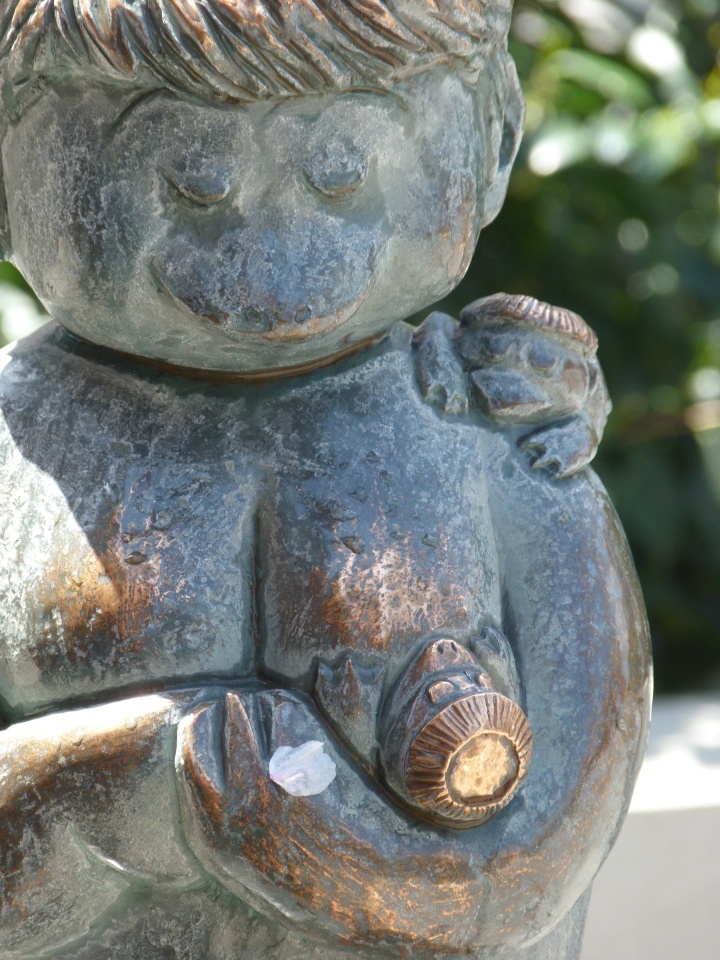 At all temples and shrines, requests are written on wooden prayer boards: for success in exams, getting a job, a husband, a wife, health – anything and everything.  Some requests are made in picture form. 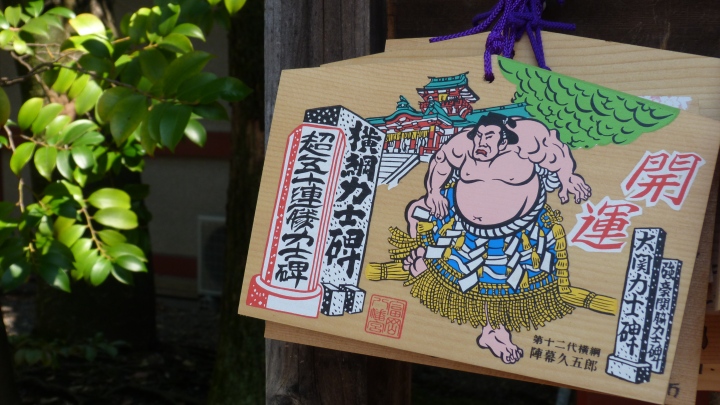 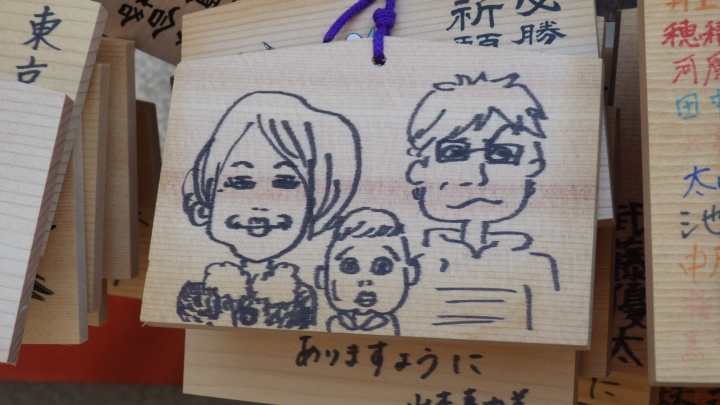 At Matsuchiyama Honryuin temple, the theme was radishes (symbols of health and family harmony) and purses – (commercial success). People bought and carried radishes to the main hall as offerings. ‘It’s like something out of Monty Python’, said Jim. Many things seemed strange to us, but we were in no doubt about the sincerity of those performing the rituals. 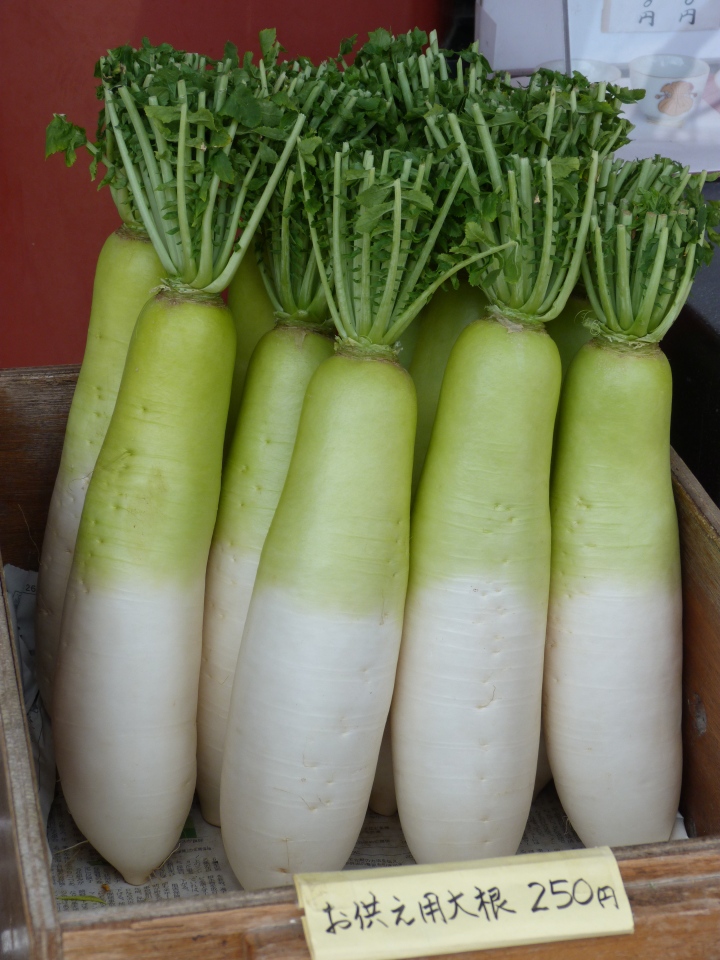 Perhaps the most amazing ceremony of all was that of the fire purification at Fukagawa Fudo temple. We got there about half an hour before it was due to start, but the place was already almost full. Chanting priests wearing vivid lime-green, lemon and incandescent purple silk robes filed onto a platform in single file. Some blew a conch shell. Somewhere in the background, symbols chimed – but it was a tiny, light tinkle – tink, tink – slow and steady at first, and then increasing in tempo, building to rapid, staccato, constant beats. An external sound became – for me – internalised. From my ears it travelled to the centre of my head and then right down to my core – a journey to the centre of myself. The chanting was a mesmerising drone; a huge energy, building from the unity of all those voices. And then the drums started. A noise so huge it made me literally wince. The drummer was standing, legs wide apart, so that he was ‘low’ and balanced, in contact with the earth. He struck seemingly with all his might. An overwhelming sound – and yet only one, in the midst of the rest. It filled me with joy, and made me feel free. I wanted to smile and bang wildly on a drum of my own. But I sat, and watched as the sacred fire was lit and people moved forwards with bags and books, anything they wanted to be purified and passed through the smoke.

‘We’re not religious but we like ritual’, someone else told us. That well-educated, affluent people believe in what seems to us to be superstition, is hard to understand. But then the premises of many religions are difficult to fathom. And there is comfort and social contact in ritual. Ritual allows us to take a moment to concentrate on what we want, it opens space for positivity and empowerment. It just feels good. I wasn’t passing anything up to be cleansed in the fire at Fukagawa Fudo, but the ritual allowed me to be with myself for a while, gave a few moments for reflection, and well, really lit my fire!

Just because it looks strange, doesn’t mean to say it is!