Jim wanted to go. I was only six when it happened. Son My had no place in my consciousness. Jim was eighteen. ‘I was angry at the Americans, angry about the war. I can’t be so close and not go’, he told me. So I went – because he wanted to, and maybe to learn something.

We hired bikes and cycled. Close to the river on a three lane highway. The highway was so new that no-one was using it yet, so we cycled in peace, the odd motorbike passing, still tooting away, although there was no need. We could have been in the countryside, surrounded by rice paddies and vegetable plots as we were, and momentarily a picture-book wooden stilted bridge on our right. We noticed photographers, surely they weren’t taking pictures of us? Before we had time to think the procession was upon us – a newly married couple on a motorbike, the bride sitting sideways, carrying her cake in front of her, bridesmaids and males coupled on bikes behind. They all waved, all shouted hello, and laughed. We were right in the middle of it, and will be forever in their photographs.

We reached the village. I went to learn something but I’m not sure I did. Like the photographers it was a puzzle. The site was beautiful, tranquil, full of colour, scented flowers and palms swaying in the breeze. Silence. We were alone. We listened. You might think the earth would stop spinning after such a thing, but it does not. A disaster for one does not register with another.

House foundations remain, names of family members noted neatly on plaques. Old people. Or children younger than I was at the time. The Americans claimed it was a Viet Cong village, but men between twenty and thirty feature nowhere in lists of the dead. One house has been restored; beds and a dresser, pink lotus flowers and yellow bananas against a grey concrete wall. An old woman prepares breakfast for her grandson in an outdoor kitchen, the cow grazing in a wicker enclosure close by. It takes me a fraction of a second to realise that they are mannequins but even so I feel compelled to place my hand on the head of the boy. To let it rest there. He is not real, but I’m sure the dead feel my energy and intention. 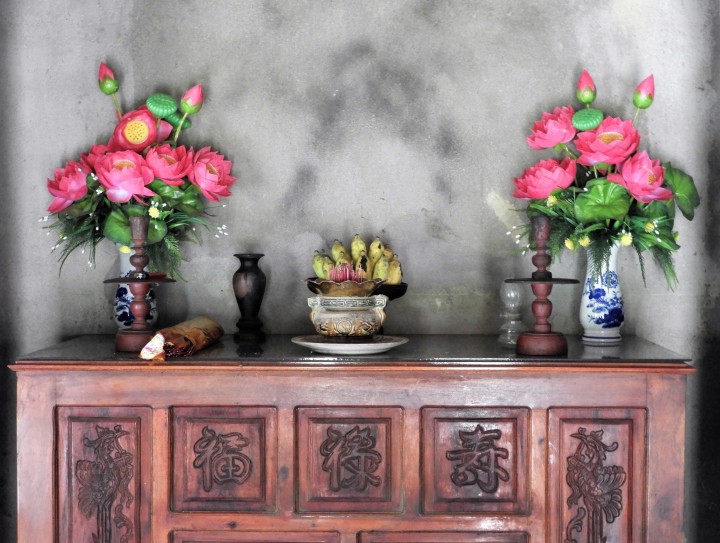 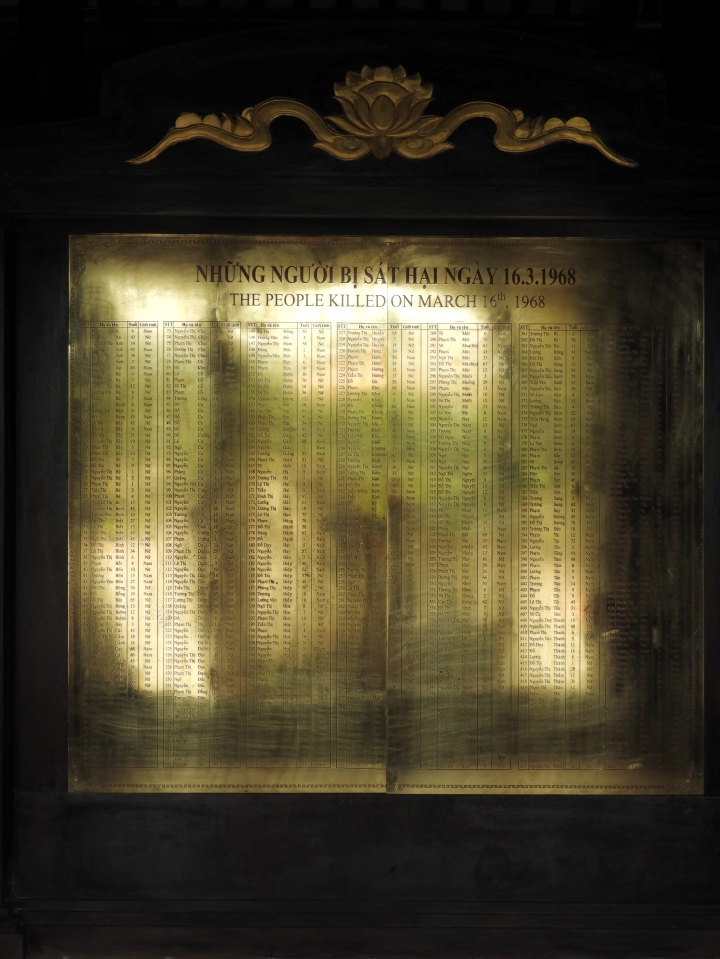 At about 07.30am on 16 March 1968 the US Army’s Charlie Company landed close to Son My. They encountered no resistance and did not come under fire at any time during the operation. The museum shows an American military photographer’s graphic photographs of what happened next. A seventy-two year old man thrown down a well, a hand grenade after him. A small group of women and children clustered together under a tree. A child’s face creased with tears and fear. Two boys lying dead on a dirt track, the older brother curled protectively around the younger, trying to shield him from what was to come. Between seventy-five and one hundred and fifty villagers were herded to a ditch, where they were executed by machine gun fire. Livestock was slaughtered, dwellings and crops burned, girls and women gang raped.

Words do not, cannot, convey the terror, noise, fear, and devastation. The brutality. The pain. The suffering. The violence. Why? was the question that burned. Son My was almost certainly not the only massacre. Outrages occur constantly during war. The museum – perhaps understandably – makes no attempt at understanding. But we did as we sat looking at the memorial. That was the only way we could deal with the enormity of it. 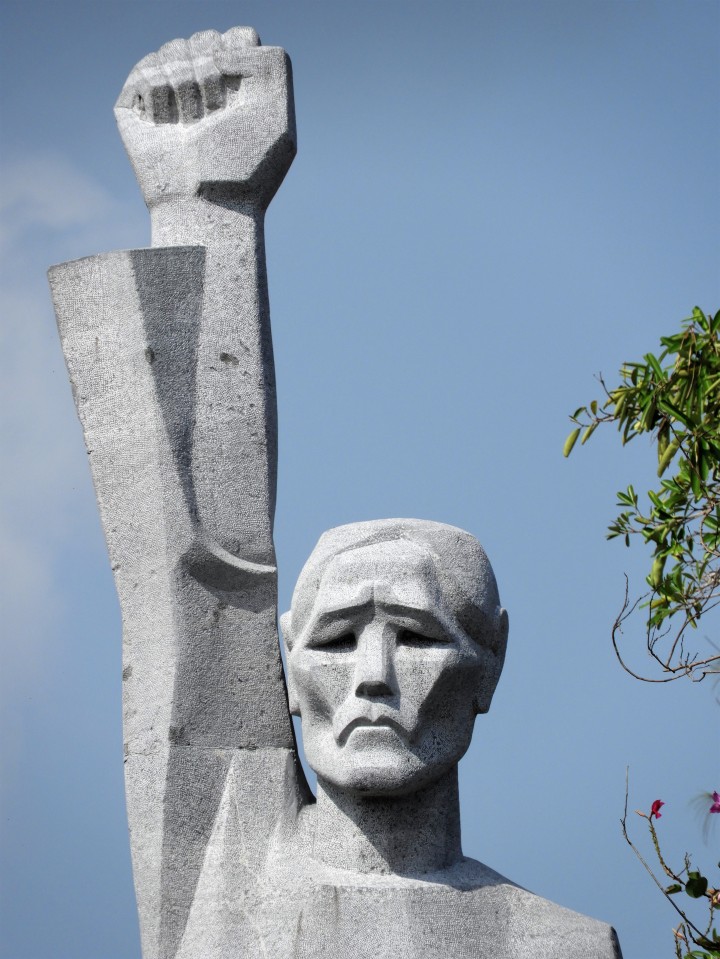 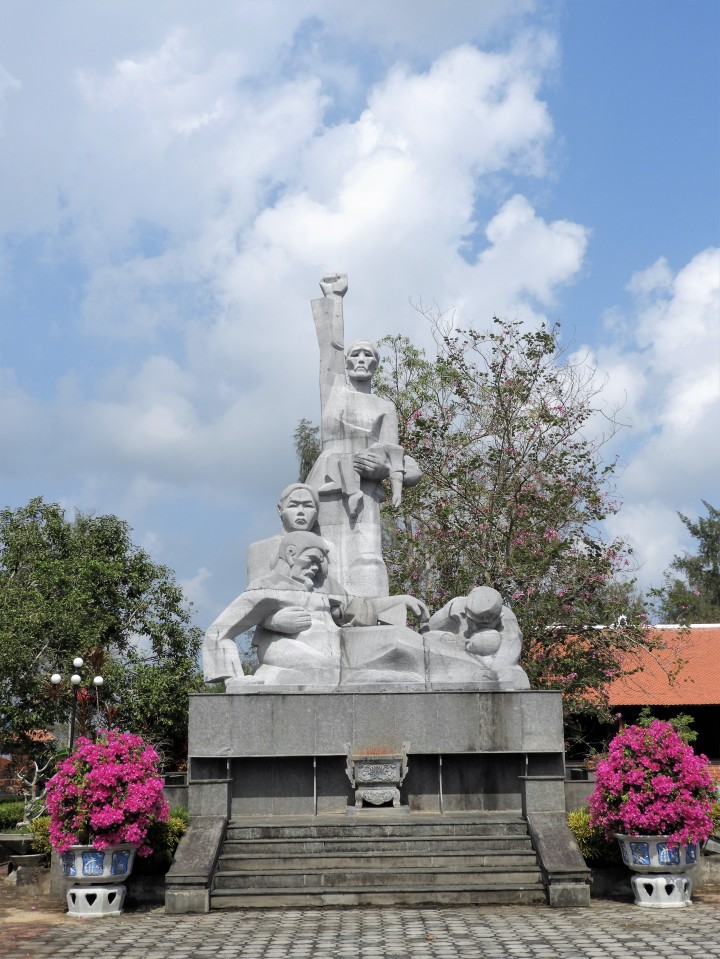 The Americans were fighting an elusive, seemingly invisible enemy, one that injured and killed by stealth. Charlie Company had suffered twenty-eight casualties involving mines or booby-traps; one just two days before the massacre when a popular sergeant was lost to a land mine. The enemy were supported by villagers like those living in Son My – all Vietnamese were therefore suspect. ‘They’re all VC, now go and get them’, Ernst Medina (Captain of Charlie Company) reportedly told GI’s at the briefing.

When I laid my hand on the head of the dummy boy I wanted to tell him ‘I’m sorry’. What I meant was ‘I’m sorry for us all’.

Difficult things should not be avoided. I am glad I went to Son My. I cannot say why. It just felt right.