The cow burned on a fire. Black and bloated. A shirtless lad poked it with a tree branch while an old man occasionally flecked water over it’s rigid body. Plumes of smoke created a heat haze and masked their somewhat macabre business. Other men squatted on their haunches and rocked back on their heels, smoking cigarettes and barbecuing a spatch-cocked chicken. They laughed together while children crowded onto the outdoor platform of a stilted wooden house watching two women strip banana tree trunks. Piles of the chopped vegetable, heaped in back baskets, dotted the ground, and two enormous red bowls of salad greens waited to be washed. A party was in the making.

A small man with a lined, serious face invited us into the house. A faded picture of Uncle Ho smiled down on us and daylight winked up through the floorboards. There was not much else. A motley assortment of clothes hanging over a wooden rail, small plastic baskets, an electric socket, bits and bobs, odds and sods, scattered around. The rice wine jar stood in the middle of the room, a tiny plastic stool by it’s side. The old man gestured. Jim first. Always the oldest first, as a mark of respect. With difficulty Jim arranged himself on the stool, and sucked through the communal straw. Our host added wine to the jar as he drank. ‘More, more’, he urged. 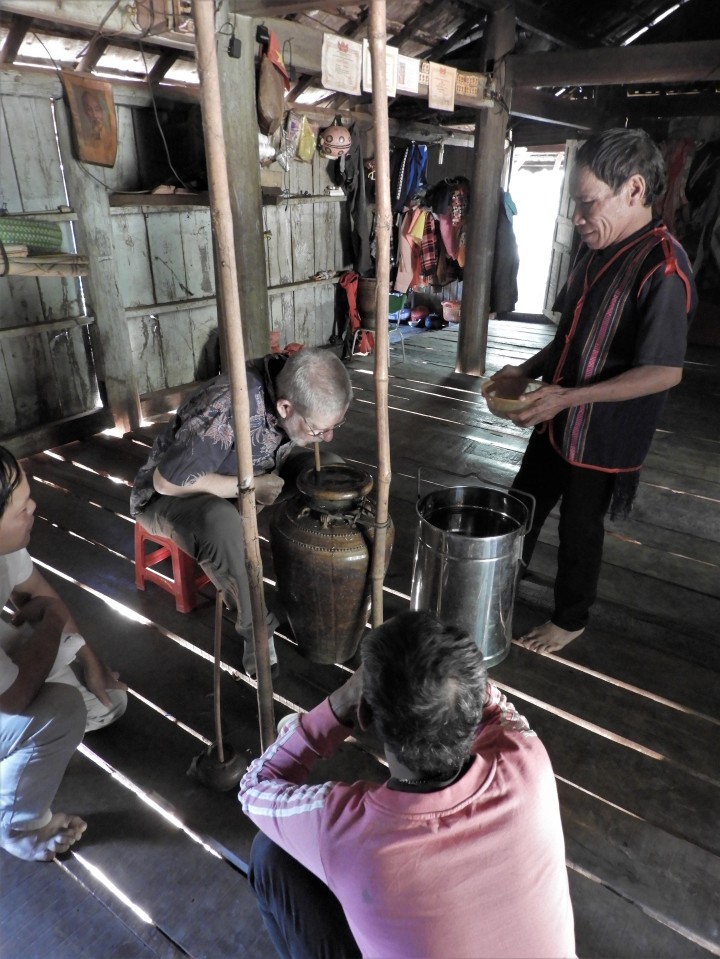 They were giving thanks for… we knew not what. The animistic Jarai people seemingly sacrifice pigs, goats, cows at the drop of a hat – to ensure a good harvest, on meeting a namesake, on the death of a family member – whenever they need to appease the gods and earn good fortune. Later, the whole village would attend. There would be dancing, gong-bashing, and rice-wine drinking for two or three days. A few moments later, on the red earth path that surrounds the village, we met a lady on her way to join the festivities. In the cane basket on her back, a gift for the family. Pints of milk in squashy cartons. ‘Everyone must take something’, Mr Manh told us. She clutched our hands with fervour, and I swear she said, ‘olay, olay, olay’. ‘I think she’s started already’, muttered Jim.

Small coffee and rubber plantations surrounded the houses. Fruit could be plucked from the trees. Scraggy chickens scratched the dirt, dogs barked as we passed and children called hello. According to Mr Manh, most villagers, even the younger generation, had no wish to change their lives. They were happy to settle for tradition, a round of sacrifice, partying and poverty rather than the regulation and relative economic well-being that working for a large rubber or coffee corporation would bring.

Down by the river, we reached the cemetery. Small corrugated iron huts, memorials to the dead; heaped with objects an ancestor might need for their soul to continue it’s journey. Bicycles, stone axe heads, fertilisers, fishing traps, bits of rope, plastic bottles of rice wine, incense. Patches of ash, the remains of fires, next to the enclosures – in the early morning the living commune with the dead. Carved wooden statues, long sad faces mounted guard around tombs of the more wealthy. The ritual of burial requires the sacrifice of a cow from every child – a practice that continues annually until the family can no longer afford to carry on with it. Then there is an abandonment ceremony – more sacrifice, rice wine and partying. ‘But this is not a sad time, the soul is then independent and free’, Mr Manh told us. It was eerie and emotional. A hint of something pure and almost innocent, the natural and supernatural, the living and the dead combined. 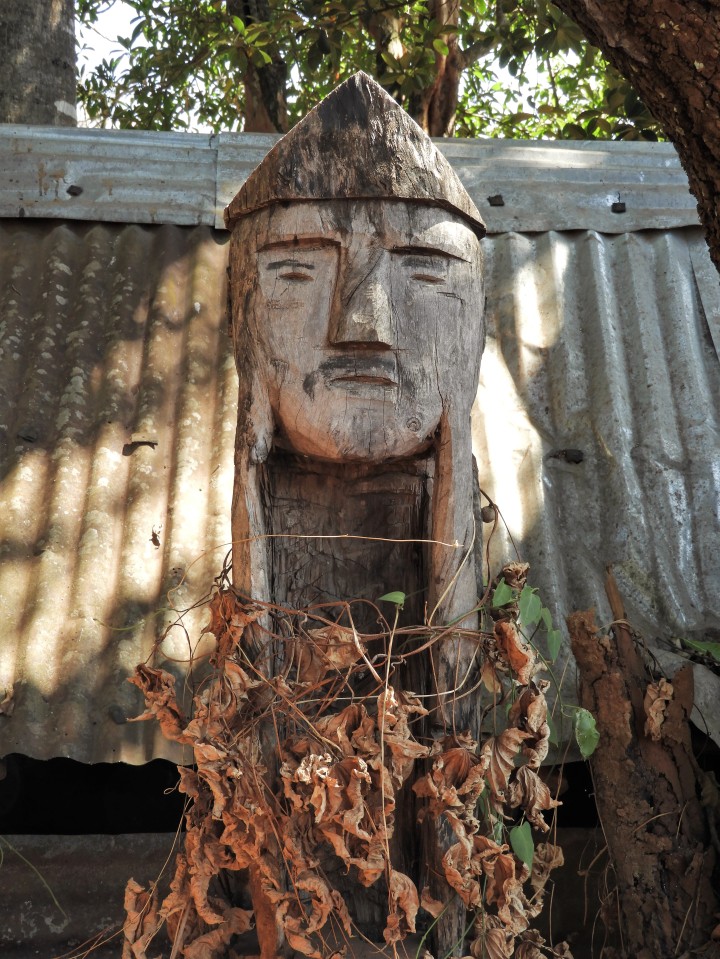 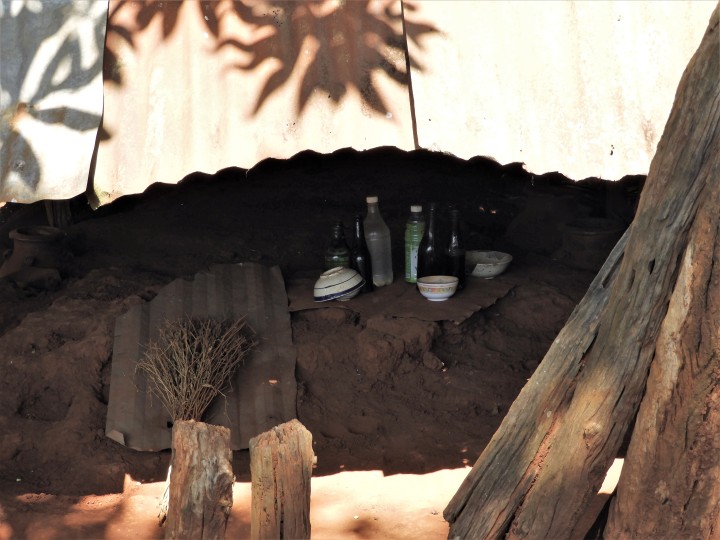 In the afternoon we visited Bahnar villages, one almost in the middle of the small city of Kontum. Astounding that in the midst of 21st century life, ethnic groups live in stilted wooden houses, cattle lowing beneath them and women weave traditional hangings on an outside hand loom. Converted to Catholicism by French missionaries, most Bahnar houses sported a nativity scene – stables surrounded by grottos and tinsel, and over-sized baby Jesus’s looked over by tigers and make-believe fantastical animals. The Rong or community house stood in the centre of every village. Thatched roofs soaring high, awkward steps carved into tree trunks, some locked, others wide open and welcoming. Kids played football in front of them, one provided additional classroom space, another sported a tiny market on it’s doorstep – frogs and fish jostling for space with high-heeled shoes. 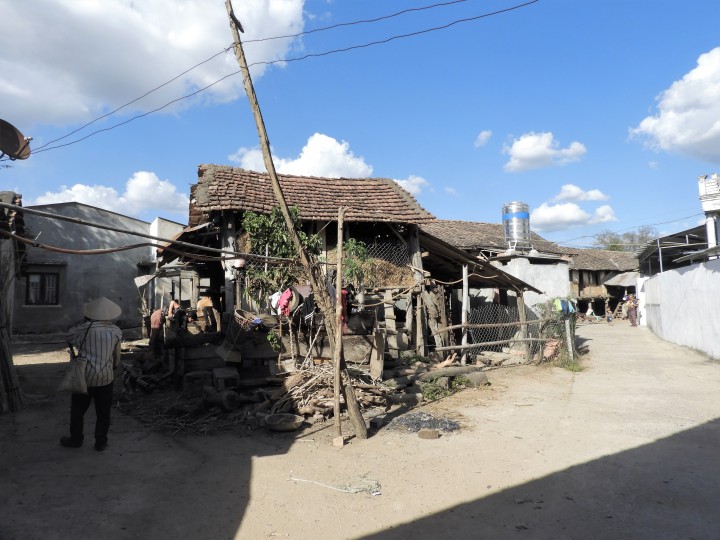 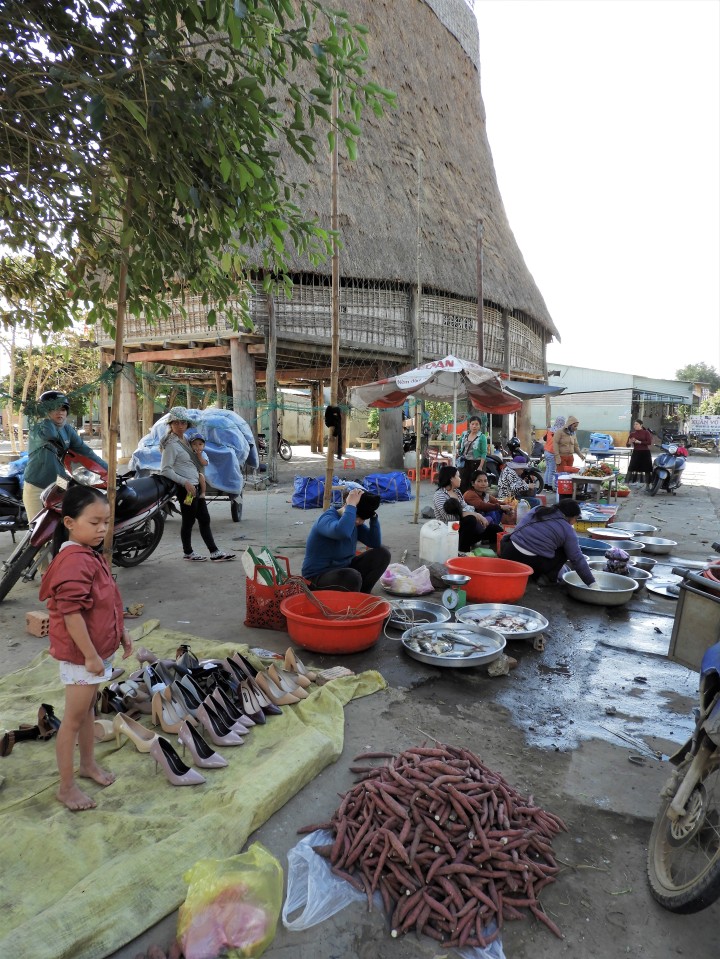 Modern houses stood next to the older traditional buildings. Brightly coloured metal boxes. ‘The people don’t like’, Mr Manh told us, ‘but they cannot afford to build traditional houses. The wood is too expensive’. He went on to say that the government encouraged the building of modern houses, believing people shouldn’t live steeped in dirt and cattle shit. ‘But the modern houses are too hot, are not easy to clean, and smell bad’, he said. For the first time a hint of something darker crept into his narrative. We’d read that ethnic minorities in the area were dissatisfied, wanted help, felt abandoned and had clashed with the government. Mr Manh’s English was decent but not up to such a discussion.

The homestay was in a small village on the river bank, a house right beside the rong. We watched as villagers bought in the annual cassava harvest from a steep mountainous slope on the opposite bank. The cassava carried on shoulders in sacks, and long jagged sticks of firewood stashed in back baskets. Someone fell and discovered a sack could be rolled down. Hilarity ensued. Another mistake – by a boatman, resulting in the loss of cargo, that caused all passengers to jump in the river. More laughter. It was like watching a movie. But it was not escapism. Women struggled to stand with their baskets, men punted with effort against the fast-flowing current, and people waded in water, soaked to the skin, struggling to heft, tilt and empty heavy sacks.

In the evening, when it was dark, the rong bell rung. Men gathered in the enclosed space under the floorboards, a fire was lit and the rice wine poured. We lay on our mattresses under mosquito nets and listened to the crickets, frogs, chickens, and dogs. There was music and singing. ‘Vietnam’s answer to Leonard Cohen’ muttered Jim. A fitting end to a day of questions, searching and elusive answers. 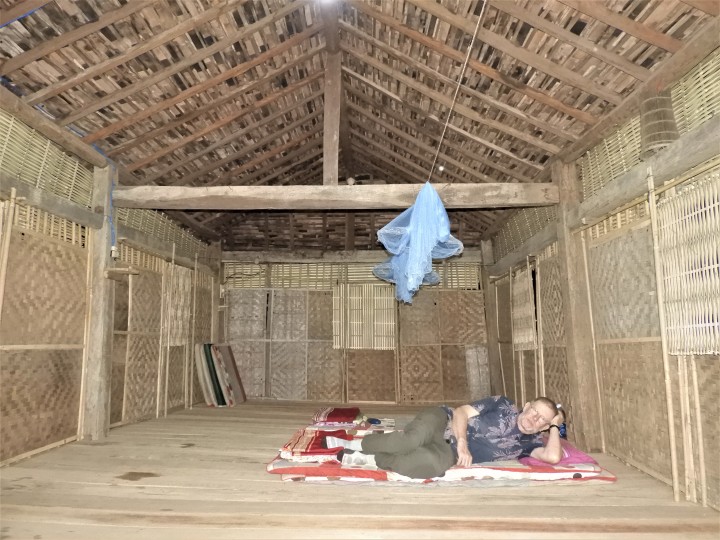 We did our tour with Eco Highlands.
http://vietnamhighlands.net/kt_002-viiting-ja-rai-bahnar-homestay-konplong/
Total cost $252 for 2 persons. If anyone wants more info. about this I’m happy to give it.

11 thoughts on “Village Life. Visiting the Jarai and Bahnar People.”