Every October in the 8th month of Kartika, business and religion come together and the quiet town of Pushkar is transformed into the circus that is the Pushkar camel festival. 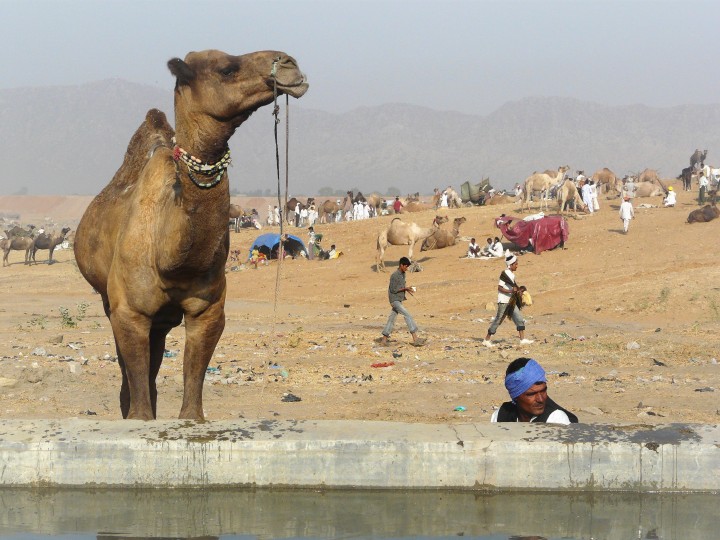 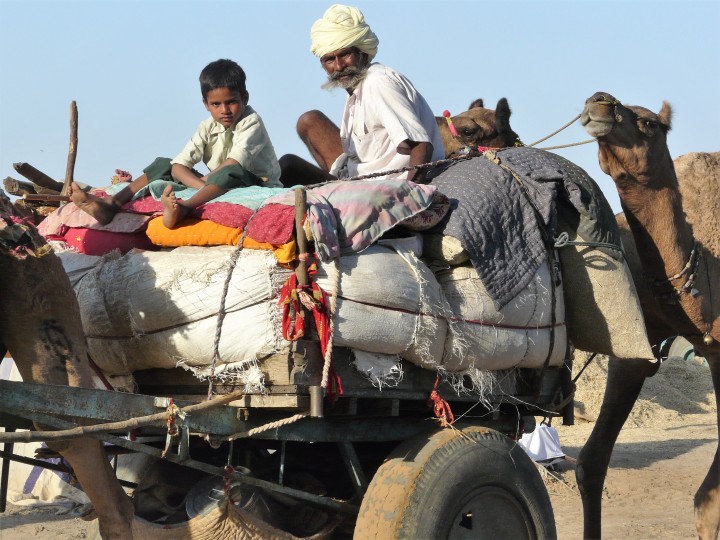 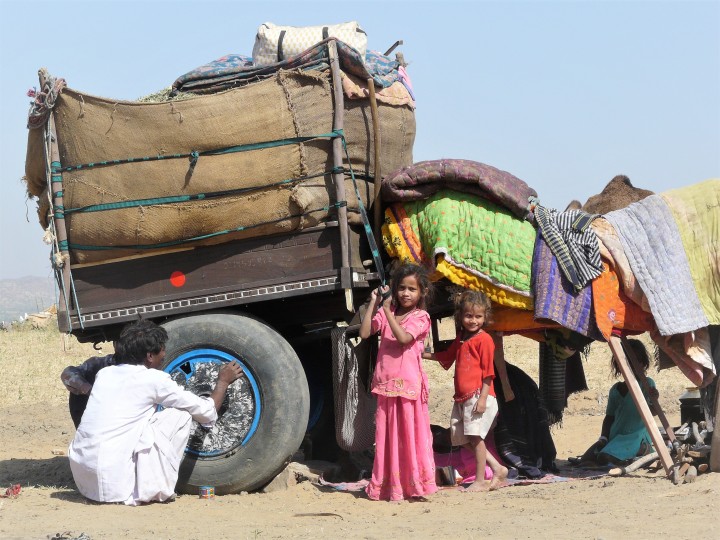 Thousands of livestock owners stir in the Thar desert, pack family and belongings onto wooden carts, trailing camels, horses, and cows behind them, to trade on the Mela ground – a huge, dry, expanse of scrub on the northern edge of town. Some 50,000 camels and cattle cover this terrain – animals as far as the eye can see. With front legs tied together, the camels eat, drink, snort, groan and slaver. Trying to encourage a sale owners decorate their animals to show them in their best light. Snouts adorned with flowers, the beasts are draped with pom-poms, tassels and bows. But a ship of the desert, even so adorned, is not a pretty sight. Comically, they chew, and screw up their faces, waiting while herders squat on their haunches, smoke hash pipes and try to clinch the all important deal. 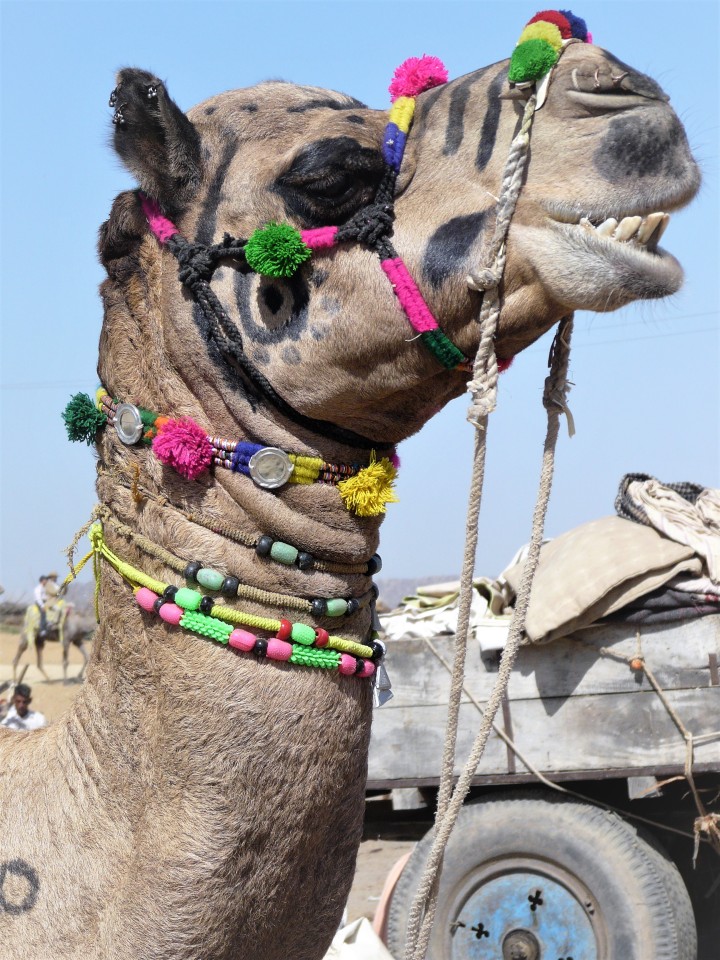 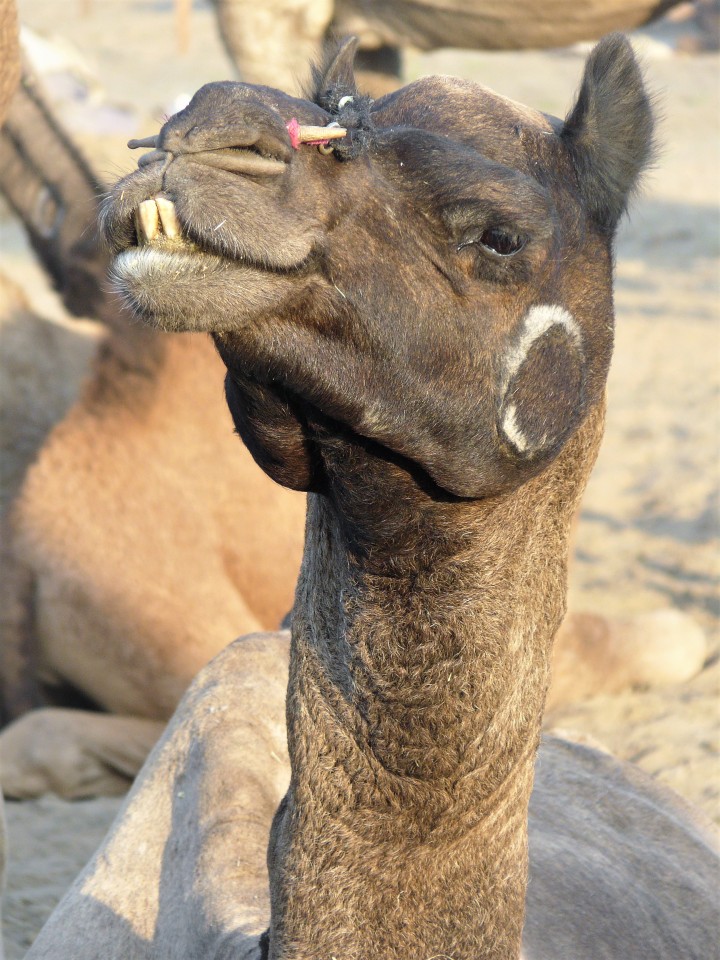 The haggling starts as the men pull at the camel’s mouth, examining the teeth to check it’s condition. The animal’s loud protests are completely ignored. Money changes hands and the serious business of buying and selling is done before the fun and games start. 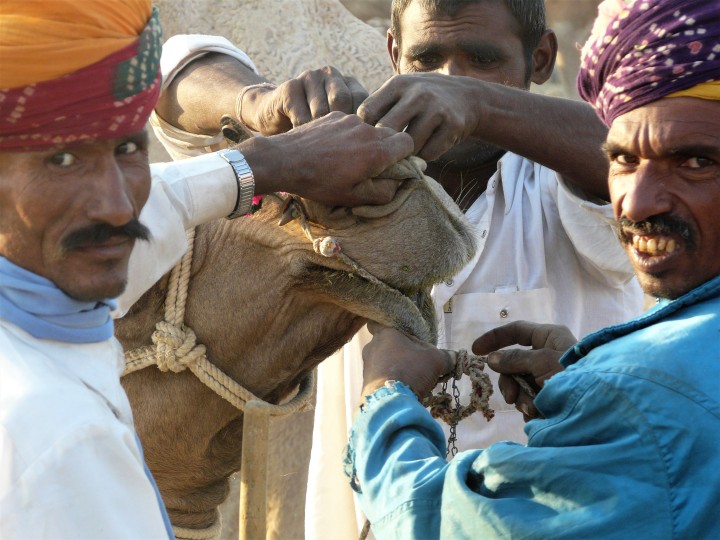 Slowly, a festival atmosphere builds. A huge fairground is set up. Itinerant sellers storm the town. Roadside stalls spring up like mushrooms out of the ground. Everything is available to be bought and sold. Farm implements, steel pans, pashmina shawls, melaware plates, T-shirts and jeans – and everywhere bangles. Glistening, sparkling armbands. Countrywomen cluster around the carts like bees around a honeypot. Already owners of the most fabulous jewellery, it seems there is always room for one more trinket. The women wear the most mind boggling colours and the most extraordinary colour-combos. Cerise and red, mustard and burgundy, fuchsia and lime green. Thin fly-a-way fabrics, edged with sequins and silver teardrops and golden lace. Veils pulled seductively over faces, a flash of an anklet here, a glimpse of a toe ring there. Faces adorned with nose rings which cover whole cheeks, forehead broaches and gold earrings. It’s a riot of colour, a cacophony of noise and a press of people. 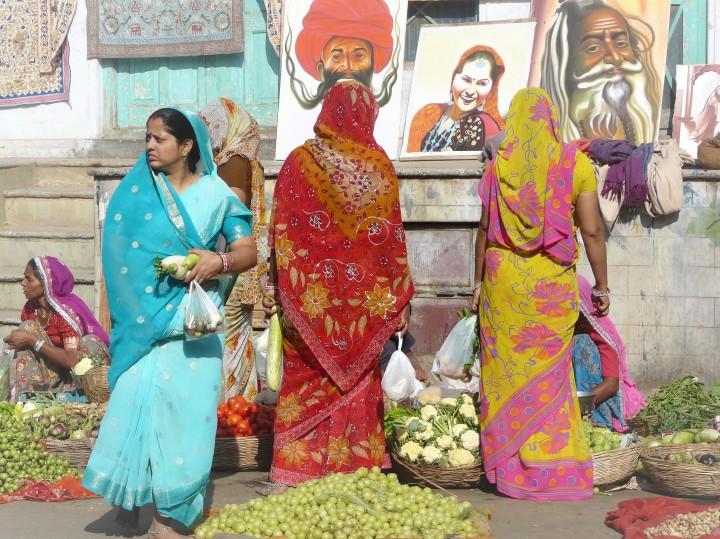 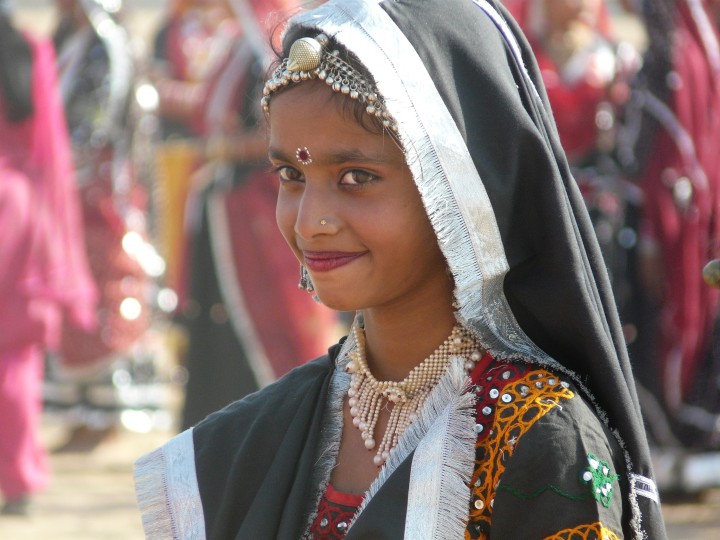 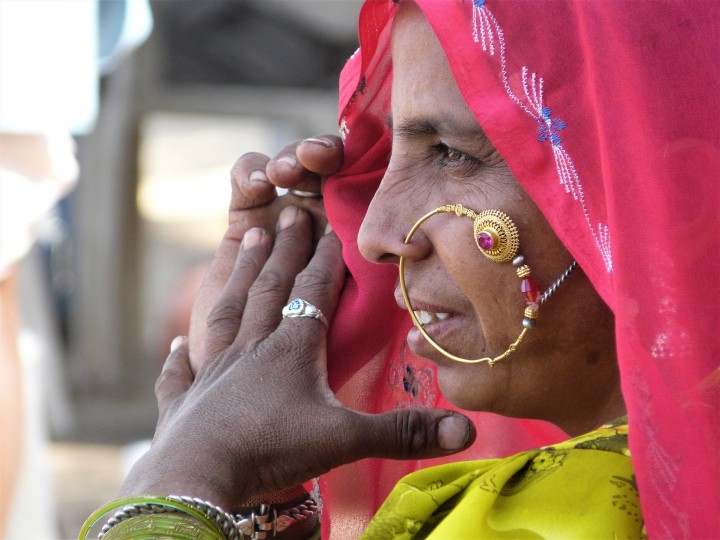 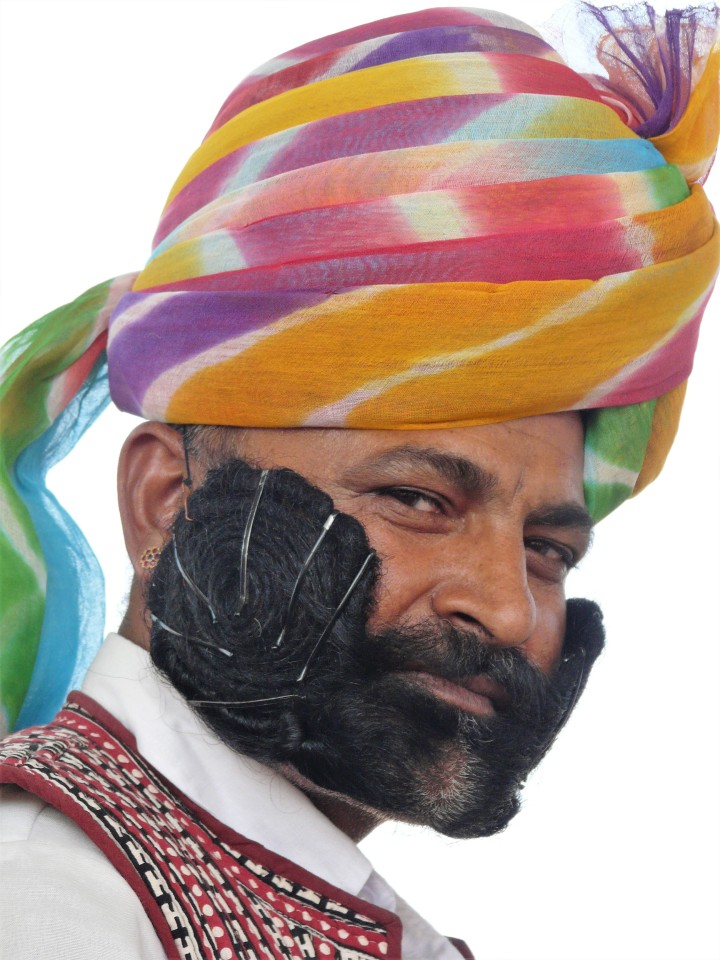 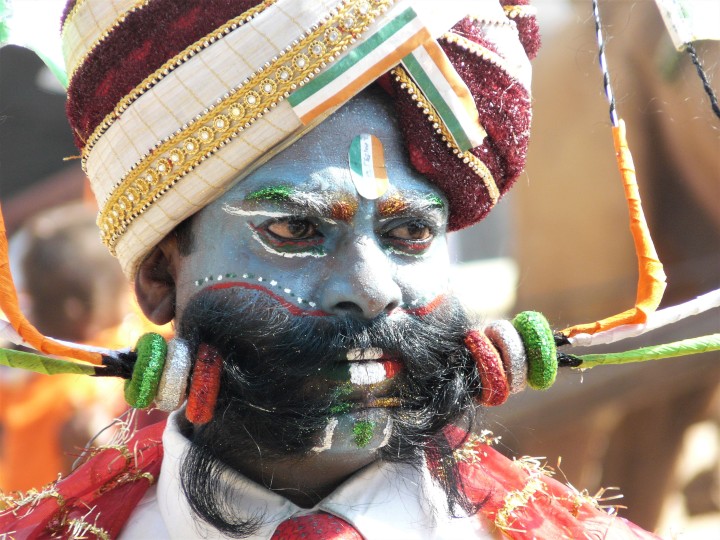 But all of this is a side show to the main event – nothing more than a sauce for the    main-dish. It’s all about the religious festival when pilgrims come to bathe in the holy waters of Pushkar lake. Legend has it that the lake appeared after Brahma had defeated his evil opponent, the devil Vajra Nabh, with a lotus flower. Where the petals of the lotus fell to earth, lakes formed. Pushkar is considered to be the most holy of these. Never mind that there is no lake, ever increasing numbers of the devout flock to the ghats. The religious fervour builds with the fair. Pilgrims douse themselves with water, (the bathing pools have been filled) and make offerings of crimson rose petals, and orange marigold blossoms. They burn incense, float tiny wax lights on the water, say prayers and are blessed by priests. To sit at the ghats in the morning, watch the sun rise and observe these ancient rituals is strangely moving – almost mesmerising. 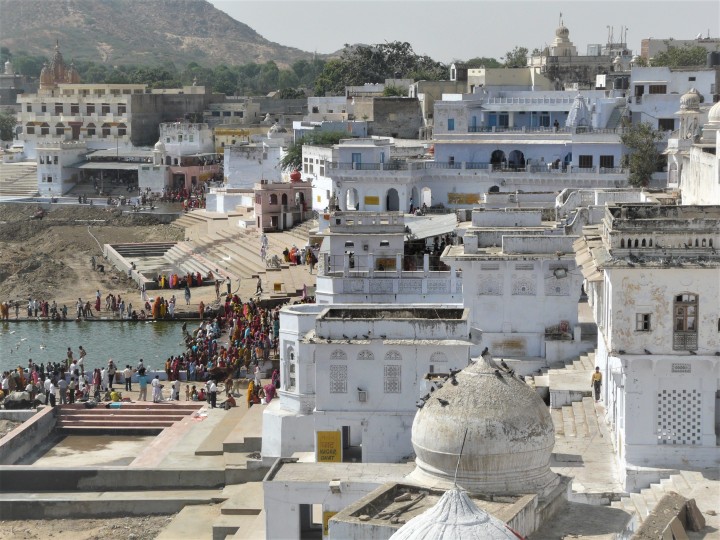 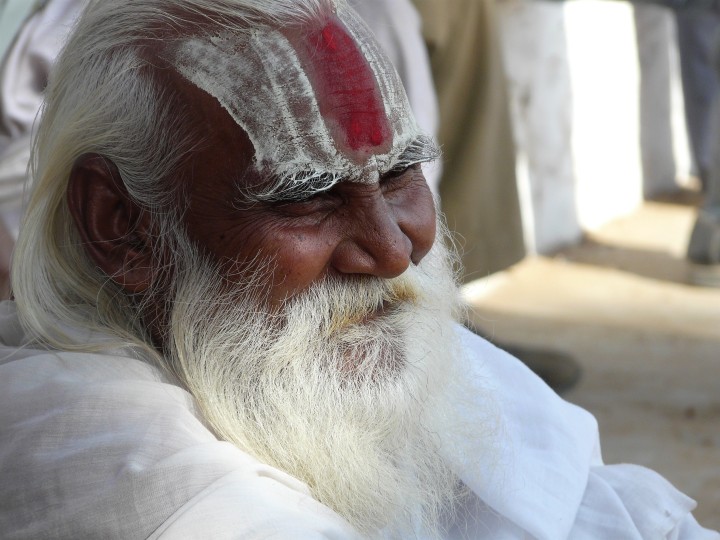 This, not the camel fair, is the heart of Pushkar. Milky white domes, tiny spires, aged havelis, and weathered temples. The religious festival reaches it’s crescendo at full moon, when thousands of pilgrims bathe to cleanse themselves of sin, and pray ‘for a happy life’. Until the next year, when the whole sequence is repeated.