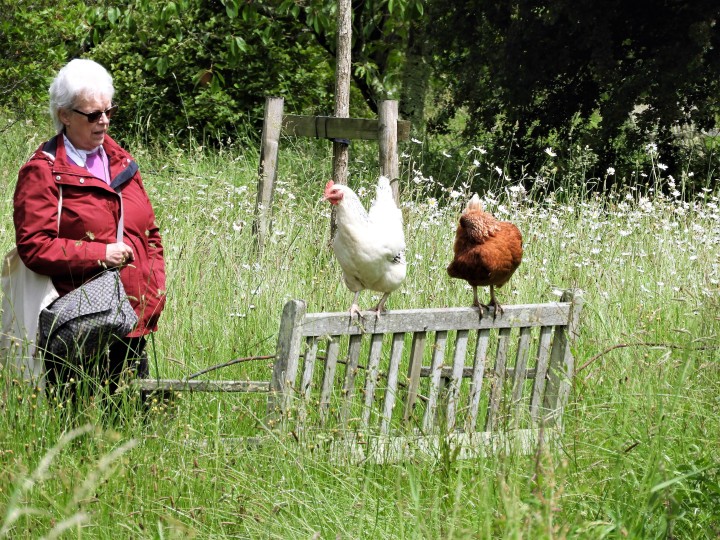 We don’t just look after dogs and cats. Sometimes there are sheep and goats. We’ve had guinea pigs and rabbits and fish, and once three little piggies. And often there are chickens. Not many people would consider a chicken to be a pet, but on a sit in Wales I had one of those world-within-a-world moments, and a whole new chicken-centred universe opened up before me.

It took a while to get to talk to Beau and Liz. Ethel was ill. ‘I said goodbye to her. I didn’t think she was going to make it’, Liz told me. Ethel is one of ‘the girls’. Of the fluffy variety. A hen. ‘We were just giving them some meal-worms’, she said as she opened the door, ‘a bit early, but we knew you were coming’. She kicked off Wellington boots and bustled about making tea. The mugs proudly bore photo-prints of the girls – Audrey, Ethel, Henrietta, Florence and Hulda. Old-lady names seem apt: hens hang out in gossiping groups, clucking and chuntering, seemingly putting the world to rights. ‘You wouldn’t call a chicken Beyonce or Chardonnay, would you?’, quipped Beau as he joined us.

We’ve never really got attached to any of the chickens we’ve looked after. There was ‘hairdressing chicken’ who’d sit on your shoulder and tousle your hair, and the chicken with funny legs that I hand-fed until he died, but mostly the chicken run consists of letting them in and out of their house, morning and evening, and throwing them a handful of grain. They take up little more than a few minutes of every day. Beau and Liz thought the same when they first got chickens. ‘Egg laying machines’, said Beau. Their hens were given a patch of grass, but quickly this was transformed to a quarter of an acre enclosed by electric fencing containing all their favourite bits of the garden – a row of leylandii, overgrown shrubs, grass and tunnels among the branches of a fallen fir.

The more time they spent with the hens the more they noticed about them. Ethel, with her enlarged heart, is one of their original hens, and rules the roost. Audrey is quiet and understated but can be mean. She was once at the bottom of the pecking order and was bullied, but now she’s number two in the house! Henrietta loves life and everybody loves her. Florrie is quiet and happy unless she is touched – she hates to be touched. ‘I took her to the vet and she screamed’, Liz told us. Hulda is sweet and loves meal-worms. She is bottom of the pecking order and is picked on ‘but she feels safe with me’, said Liz.

I asked how much time they spent with their girls. They started by saying an hour in the morning. ‘Watching as they hurry to catch the early worms and see which bugs might be around is lovely. We don’t have children, we have only one parent left, and we don’t have other pets’ they said. ‘If you take on the care of an animal you have a responsibility – a commitment to it’s care’, explained Beau, who then added ‘We spend as much time with them as we can. If I have a book to proof-read, I’ll do it with the chickens. They’ll come and sit on my lap’. ‘They know when we’re upset’, said Liz. ‘Ethel stayed with me when a family member died, she knew something was wrong’, she went on. ‘We love their excitement in the early afternoon when it’s time for their daily treat. Somehow, their delight in simple pleasures puts other things in perspective. We walk them in the evenings. It’s peaceful to be with them, to watch them, to be outside, and then we put them to bed. I know people think we’re a bit odd’, she added somewhat apologetically.

I thought it all made perfect sense. It was about enjoyment, slowing down, investing in something. And why shouldn’t chickens have personalities? It reminded me of the vegetarian ad campaign, when the cow in the field asks the dog on the other side of the fence ‘why do people eat me and love you’? As if reading my mind Liz said, ‘People should be kinder to chickens; they should realise what they have to give.’

On our next chicken run, I’m going to spend more time with the girls!