I have a list as long as my arm of places I’d like to go someday. Bologna was on that list because of Rick Stein. Rick only had a weekend, but we had a week. We walked and walked and fell in love with the city a little bit more each day.

Portico after portico. All a little bit different. Colours and textured stone,  hiding ice-cream parlours, sheltering cafes, restaurants and pedestrians from sun and rain, offering students a place to sit and drink beer, lovers a chance to sit with arms entwined, and musicians the possibility of uninterrupted play. It was a heady mix of activity and inertia. The buzz of something happening, and the knowledge that not much effort was required to achieve it. 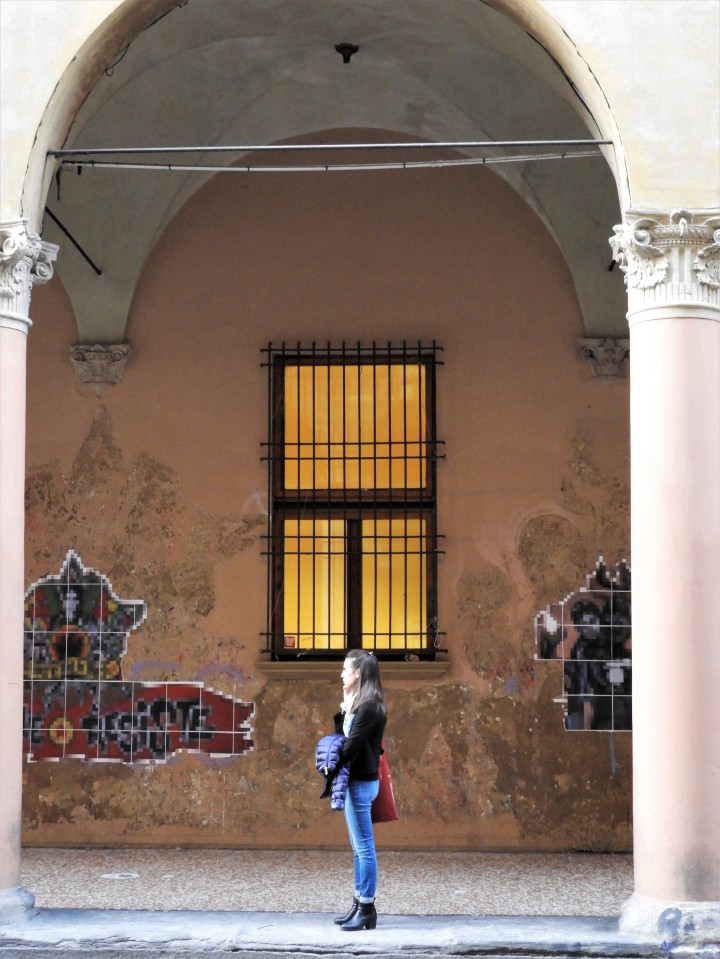 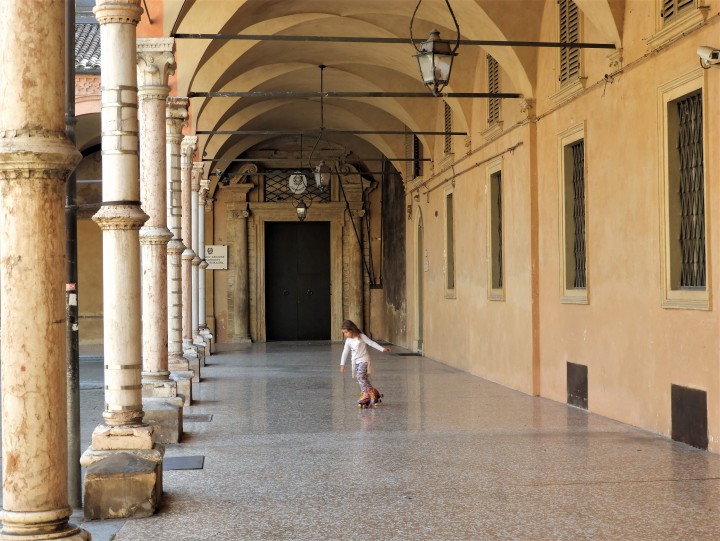 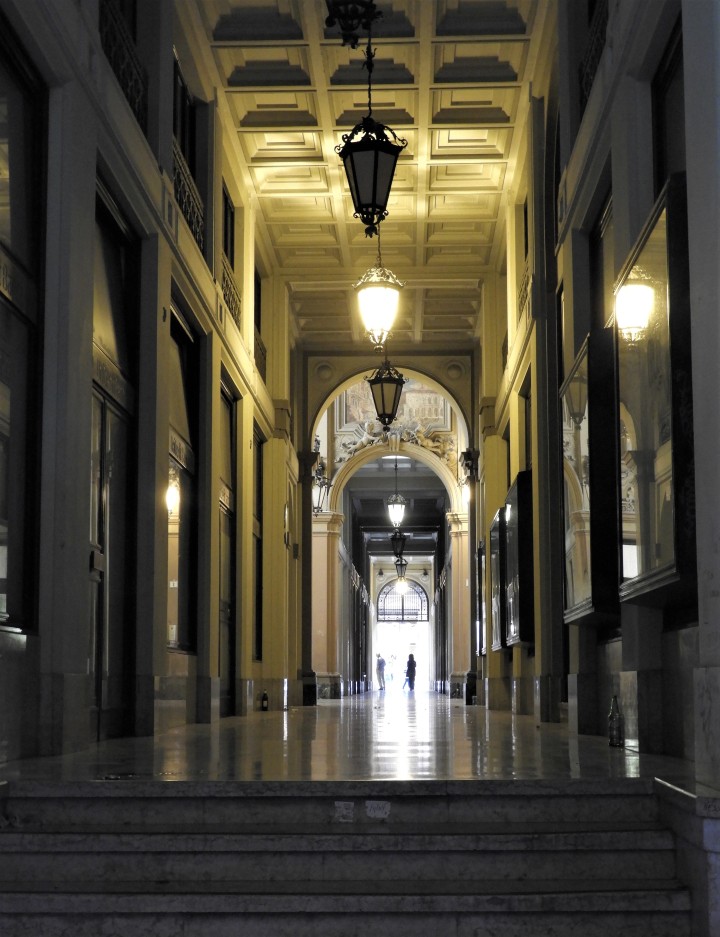 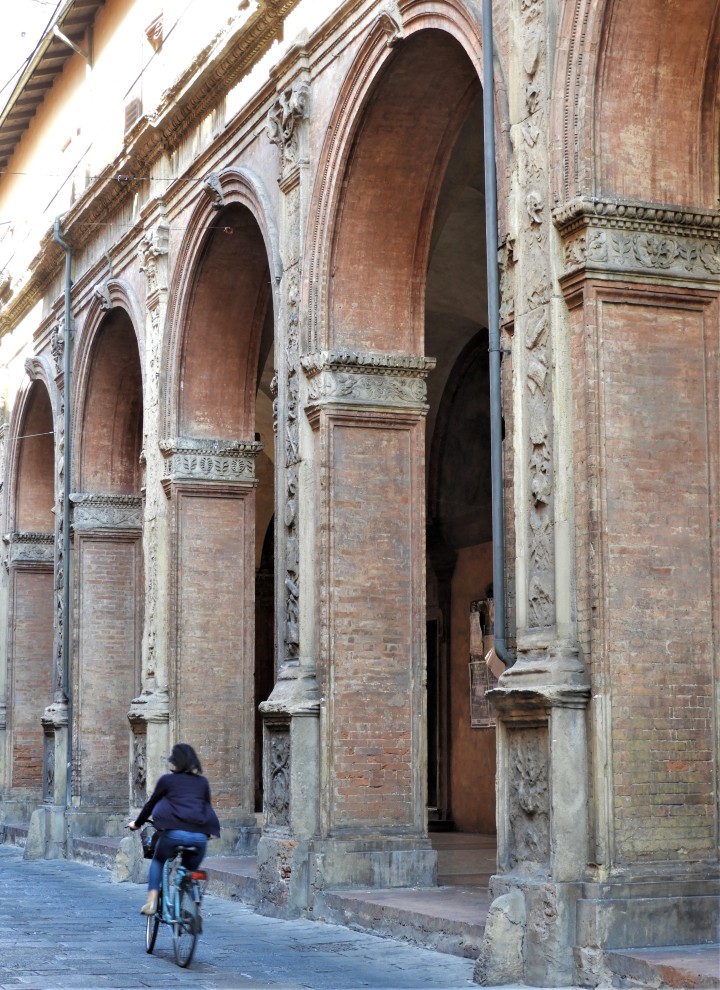 One day we roused ourselves to walk the world’s longest stretch of porticoes – a 3.8 km  slightly uphill hike under 666 arches to the Sanctuary of Madonna San Luca. The portico was down-at-heel, an unrelenting succession of arch after arch, peeling paint and faded frescoes, but locals jogged, walked dogs and strolled and it was rather meditative.  If you think 666 is an oddball number for a religious institution to emphasise  – you’d be right. Apparently the architect fell out with the church halfway through the job and this was his revenge! 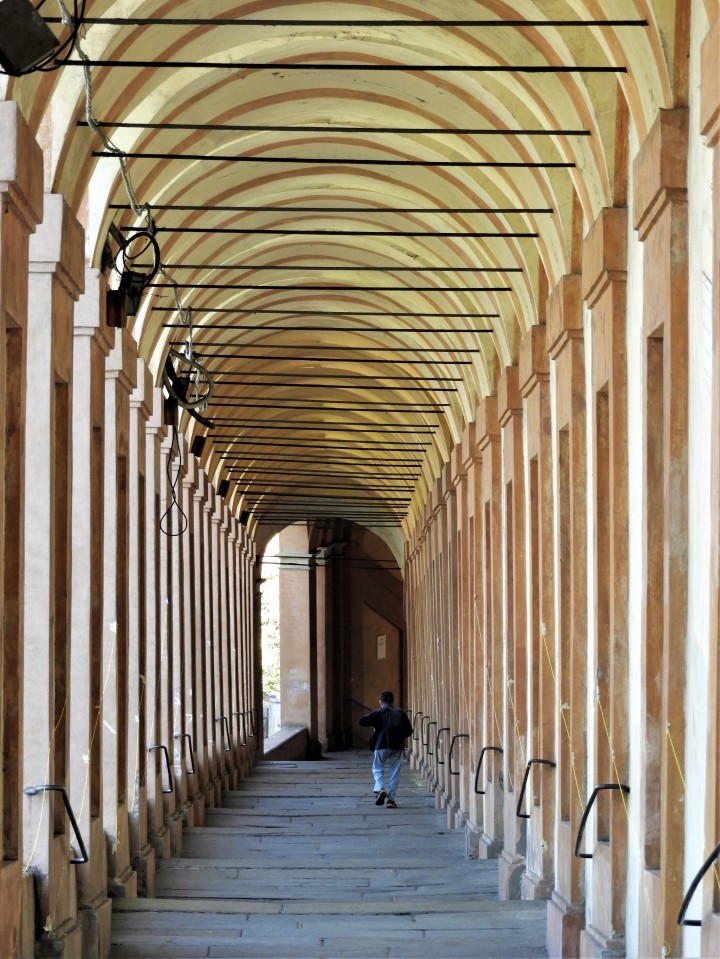 The ‘due torri’ dominated the city and our stay. We skirted around them every morning and used them as a landmark to pinpoint the start of the walk back to our Airbnb. Even the smaller one, Garisenda, is huge – and it leans. We sipped coffee at it’s foot and wondered how it still stands. Apparently every schoolboy in Bologna knows that if he stands at one corner when the wind is blowing the clouds in a certain direction it will look like the tower is falling on top of him. What a sight it must have been when hundreds of these towers (noble families competed to exert their dominance by building the tallest) dotted the skyline. A medieval Manhattan. We climbed Asinelli – 498 wide wooden steps to a gorgeous view over red roof tops and green hills.

Bologna is home to the oldest university of the Western world, founded in 1088. Every inch of it’s courtyard is covered in former students’ coats of arms. I loved the artwork, the theatricality, the sheer volume of them all. The beauty of the Teatro Anatomico where corpses were dissected for the first scientific studies of the human body was slightly marred by the presence of a large tour group and their monotone and monotonous guide, but not even their presence could spoil the library which, with more than 500,000 texts and 12,000 manuscripts, is the largest stocked civic library in Italy.

After a little exertion and excitement, we’d plump down in the Piazza Maggiore and go back to doing nothing, sip on spritz and people watch.

Check the opening times of the Sanctuary of Madonna San Luca. We arrived when it was closed for the two-hour lunch break. There is no café -just a drinks machine and there is no view from the base of the sanctuary.

15 thoughts on “Reasons To Love Bologna.”

Leave a Reply to Liesbet @ Roaming About Cancel reply