My mum burst out laughing when I told her I was tired. I could almost hear her thinking. ‘You tired? You don’t do anything’. Or as another friend recently put it. ‘How is it going with your walking from tea-shop to tea-shop’? I don’t blame them. I do lead a life of Riley. But sometimes life on the move becomes too much.

Our ‘Orient Express’ trip was becoming a slight blur. Two weeks. Three countries. Four Airbnbs. Two nights of train travel. We both loved the idea of travelling by train in theory, in practice it was not that comfortable. We were dealing with different currencies, different languages, and riding an organisational merry-go-round. And there were all the usual countless impressions of being in a new place – history, language, culture, food – all coming at us thick and fast. My head felt like it was about to burst and my body screamed for a rest. We began to feel jaded. We needed to stop.

I’d been looking forward to the idea of visiting Dracula’s castle ever since we’d started planning the trip. Never mind that Dracula had never actually been there. Never mind that Dracula never even existed. Bran was your typical fairy-tale Transylvanian castle; perched on a rocky crag, all turrets and towers, outlined against a forest backdrop. And the Dracula story, that just added a little something. That’s why we went to Sohodol, a little village not so far away from the castle. I thought I wanted one thing, but really I needed another. And Sohodol came up trumps.

We were staying at ‘grandma’s house’. One of those things that require you to put your trust in strangers. There was no train to Bran. ‘Don’t worry, we’ll pick you up’, Adriana told us. A few e-mails to and fro, and it was all figured out. We were to get off the bus at Mega Image Supermarket, stock up on provisions, and then call. As we waited, thunder rumbled and lightening flashed – how apt, – it was as if Dracula himself were welcoming us! But it was Bianca and her husband who turned up. They didn’t speak much English. We of course, no Romanian. Rain fell, the mountains were cloud covered, we saw little. A winding road, up and down, the end of a gravel track, and there was grandma’s house and Adriana with outstretched arms coming towards us.

She lead us into our side of the building. A fire burned in a huge ceramic tiled stove. Fresh wild flowers filled a vase on the white linen clothed table. A divan big enough for two strewn with cushions and pillows ranged alongside one wall, where a window overlooked a wild rambling garden. She busied herself bringing in a TV and then logs for the fire. Upstairs windows looked out onto the mountains and neighbouring houses on distant hillsides. The silence was thick. There was only the occasional bark of the guard dogs. We rested, stared into the fire, made dinner, chatted and went to bed at nine in the evening.

The next morning, Adriana’s husband knocked on our door with a bunch of tiny, tiny wild strawberries. This was the first of many kindnesses. Would we like to join them for a bar-b-que, asked Bianca., smartphone in hand, Google Translate at the ready. Four o’ clock was settled upon with the help of fingers. We drank home-made palinka (made from apples – ‘not very strong’, said Bianca) and ate pork with a delicious home-made mujdei (garlic sauce) that veritably oozed garlic. There was polenta with cheese (‘cheese from Bran’, Adriana told us) and salad, and grilled courgettes. We drank little cups of espresso in the garden under the cherry trees. ‘This is a good place’, said Adriana, as she sighed and leaned back in her chair.

And so it went. It rained. We rested. Adriana came in to light the fire. ‘Was it really your grandma’s house’, I asked. ‘Yes, and everything here reminds me of her’, she said wistfully. ‘We live here every summer. We don’t come for Christmas or Winter any-more.

Every day there was a gesture; a kindness. Small treats that made us feel so welcome and so included. Warm home-made rice pudding, served in glasses with blackcurrant jam on the side. ‘My mum used to make this’, said Jim. ‘I loved stirring the jam into it and watching it change colour’. And cheese cake. And freshly brewed coffee. And fresh cherries from the garden. 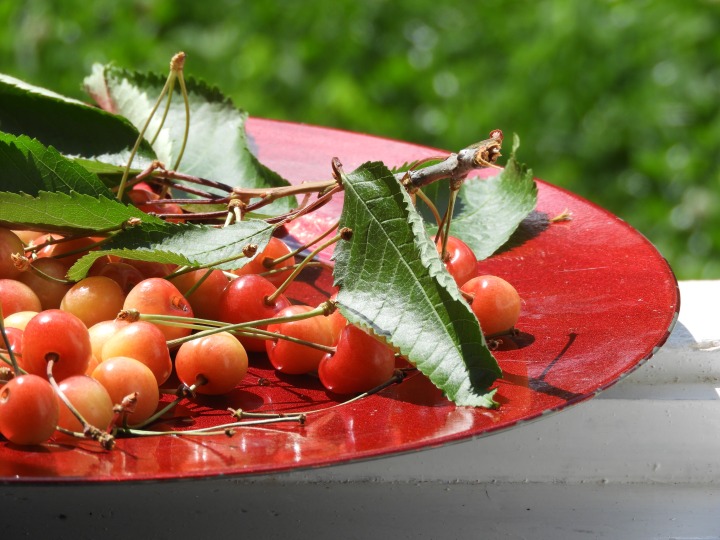 On our last day the sun shone and we walked to Bran. Past farmhouses with tilting haystacks. Cows with bells around their necks. An old lady tending a vegetable plot. Barking dogs. The Romanian orthodox church. Chickens. Pecan nut trees sprouting red berries. The castle was OK. Nothing to write home about. We wanted to get back to the garden and listen to the silence.

I will remember grandma’s house for a long time. That was the star of the show in Bran.

8 thoughts on “Grandma’s House In Bran.”