Not many people can say that they moved to France because they had to find room to house twenty-four animals.

Roland used to work at Scotland Yard. He had a colleague in the mounted police. There is no money in the British system for pensions for police work-horses. The police can hardly fund sufficient policemen, let alone keep old horses in clover. Roland’s colleague knew that if he couldn’t find a place for his horse, he’d be put down. Enter Roland’s mum. 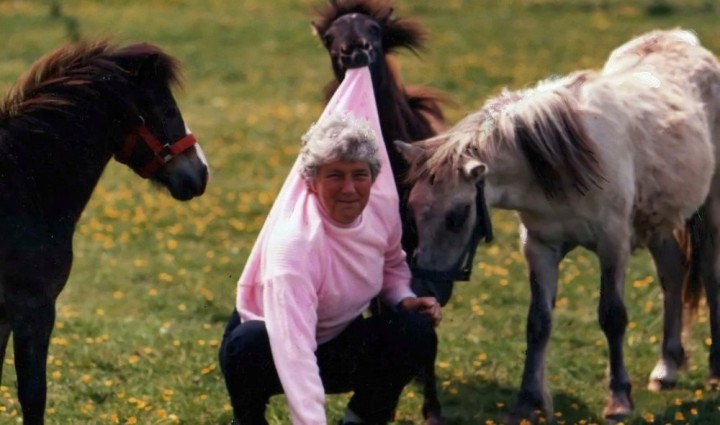 ‘My mum was a crazy old bird’, said Roland with a cheeky grin. She started the Devon Horse and Pony Sanctuary. ‘She’d wake up and find horses tied to the gate. When she died, we inherited them. I never thought I’d be doing this – ever; but sometimes you go with what life offers’. The Devon operation is still going strong, but to make the money stretch further Roland and his wife Alison moved lock, stock, and horses to the Dordogne.

La Grange is a beautiful place. An old stone farmhouse at the end of a track. Fields stretching endlessly. A cat stalking in the grass. Goats resting in the shade. Chickens roosting. Calm and quite idyllic. Poppy, a little poodle-type dog, spent a long time sniffing my trousers. She was also a rescue. That’s how the place felt – a kind of melting pot, animals, people, some with problems, some not, all helping each other. Roland told us ‘You don’t have to have a connection with horses to enjoy it here. It’s in your DNA – man and horse have worked together for centuries. We see you as part of their rehabilitation. They need to learn to trust again’.

We were taken out to the stables. That horsey smell hit me. Shit and sweat and hay. Heads popped over wooden doors. Comic and Copperfield, a retired National Trust carriage horse, are BFF’s. Comic was left in a field on his own for three years and gets anxious if Copperfield isn’t around. He nuzzled Roland. Roland tickled him under his chin. I swear that horse threw back his head and laughed. His lips hovered, he showed his teeth, and his head wobbled. The equine equivalent of a belly laugh! ‘If you only hug one horse here today, make it this one’, Ronald said.

There are eleven retired police horses. All of them have histories. Ranger served in the Upton Park Riots, and Roland thinks his arthritis was bought on by having fireworks thrown at him. A lazer beam was shone into his eyes to spook him. Johnston was struck with an iron bar across the back of his legs. Gallipoli, ‘a very brave little horse’, moved in front of Lewis to protect him from the bottles, sticks and slabs of concrete thrown at him after his riot head gear was torn off. Poor Lewis had a complete mental breakdown. Gallipoli himself was ridden so hard during the riots that his back could take no more – literally: he threw his last rider, and was retired. ‘We separate the horses into ‘good and bad boys’, Roland told us; ‘Look into his eyes’, he said, nodding at Gallipoli, ‘would you mess with him?’ But he added that riding him was like sitting in an armchair, and four of Gallipoli’s police riders have been to see him in his new home.

In another stable we could only see four ears poking over the door. Edward and Harriet, brother and sister, two miniature Mediterranean donkeys, came from a petting zoo in Bristol. Snuffling snouts inched towards us; they know they’re adorable and lapped up the attention. But they are naughty. During one cream-tea session on the lawn, Harriet escaped and wandered amongst the visitors, and Edward, unable to get out, split eardrums, braying hard for her return.

And finally we got to meet Lewis. He’d been sticking his head over his door the whole time, watching, waiting. A stable girl cradled his head in her arms now and again as she leaned against his stall. Roland lead him out into the yard. Massive, at 18.3 hands, Lewis dwarfed him. Everyone wanted to touch him. I let his muzzle rest in my palm, soft and velvety, and felt his warm breath. I patted his head and flank. ‘Watch your feet’, Roland cried as Lewis shifted his weight. And this was the horse, who had so lost his confidence, that he could only stand in a corner of his stall when he arrived, head hanging, facing away from the world. What a bit of love and the Dordogne sunshine can do. 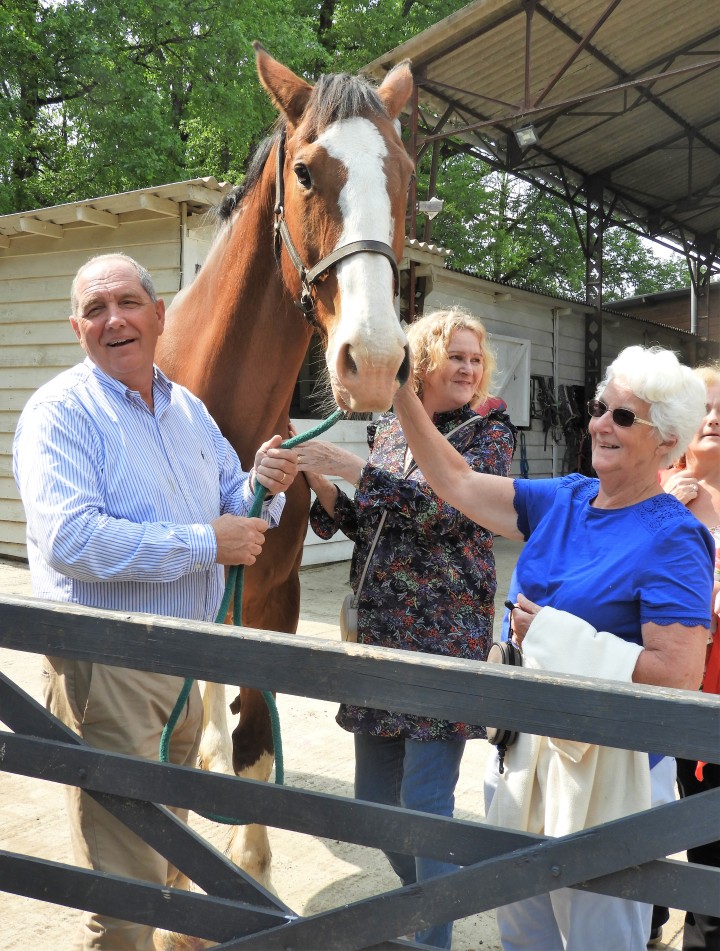 It seems we make the horses feel good, and they return the favour. It was a pleasure to be with them. It made me laugh and it made me feel happy. There was no hurry. We could spend as much time as we wanted in the yard, hanging over stable doors, stroking, patting and hugging. Therapy wrapped in horsehair!

And as if all of this wasn’t enough, there was also cake. Serious cake. A sideboard groaning under the weight of death-by-chocolate, lemon drizzle, Victoria cream sponge, coffee-and-walnut, scones with jam and cream and lashings of tea. It was all very British, except we were in France. A photo of Roland’s mum presided over the gateaux, and all seemed very right with the world.

13 thoughts on “The grass really is greener in the Dordogne.”