They are everywhere in La Paz. Bowler-hatted women with wide layered skirts and yards of petticoats. A strange look. A fashion adopted from the colonists who used their own Spanish style to separate themselves from the indigenous people. But the Aymara took it, and made it their own, and centuries after the Spanish left, flounced skirts (known as a pollera) and fringed shawls continue to be ‘de rigeur’ among native women.

It’s a striking look. Matronly. Not at all sexy. But maybe Aymara men feel differently. All those petticoats (centros) emphasise the hips, and suggest that the women will be good child-bearers. And children are important to the Aymara; families are large, each child, it’s reasoned, a source of eventual income. The look seems to be all about bulk. As many as twenty polleras and centros can be worn together, although three or four is more likely. Normal everyday attire, skirts topped off with layers of woollen jumpers, cardigans and shawls and an apron. Calves encased in chunky, patterned leg warmers. ‘If a woman has strong calves, it’s thought she will be a good worker’, Sergio, our guide on a city walking tour, told us. It’s the colour that saves the style. All manner of shocking, impossible shades and patterns combined to make a unique whole. Tangerine and red. Lime green and fuschia pink. Dots, stripes and floral. Anything goes. And often there’s a bit of sparkle going on. And to top it all off, the bowler. The lady doesn’t wear it exactly. It just sits on top of her head, or perches at a precarious angle. They don’t use pins. It’s all about balance. Bowlers used to be white, nowadays they are brown, or black or grey. The brim can be worn up or down. Some are adorned with tassles. On special occasions jewels. When it rains, the bowlers are protected with clear plastic bags, and still tip at a jaunty angle. 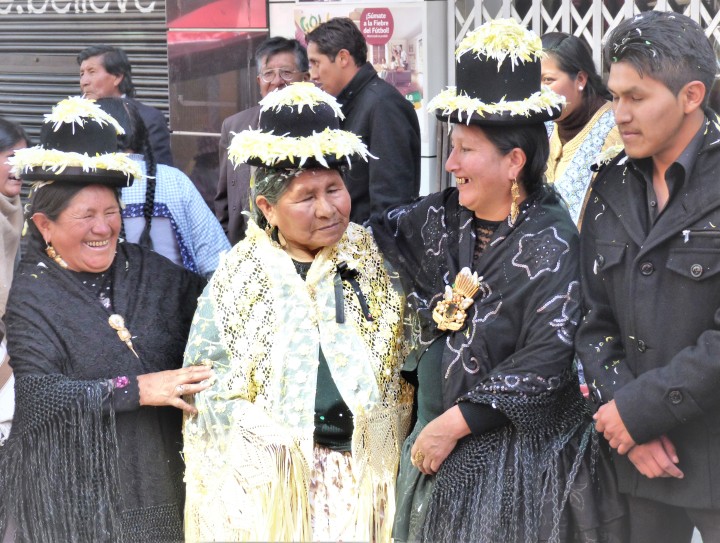 When a cholita gets dressed up she really goes to town. ‘Some of them have a lot of money, and if they don’t they borrow it. It’s important to them to display wealth’, Alejandra, another guide, told us.

We went to the cholita shopping arcade, where notices advertised jewellery for hire or sale, and row upon row of lace petticoats hung over shop doorways. Lemon, lilac, aquamarine, apricot and mustard. A petticoat can cost between two and three hundred BOB. A bowler anything between eighty and a thousand. ‘Some of the really wealthy women hire bodyguards when they dance in festivals, to prevent hat-snatching’, Ale told us. Mannequins displayed the latest cholita trends – to the uninitiated all cholitas may look the same, but each year there are new styles of pollera, different fabrics, different colours. There are even cholita fashion shows! But things are changing. Young girls are turning to western styles of dress, at least in their day-to-day lives. Many indigenous girls attend university nowadays and are expected to adopt business clothes to be successful.

But the traditional style of dress still features strongly. For the cholita, clothes mean more than fashion. They are an expression of her status and heritage. Inextricably bound with her culture and beliefs. And a fixed feature of the La Paz cityscape.