The English non summer didn’t stop us getting some walking in. Tully and Harley didn’t care about rain or grey skies and nor we decided should we. As Ruskin said there is no such thing as bad weather – just bad clothes. Besides the South West Coast path ran almost in front of the door, and it would have been a crime to miss it.

I have always wanted to have a great adventure, walk around the world like Ffyona Campbell or some such, but I am not brave and like my creature comforts, so it will probably never happen. The South West Coast Path runs for 630 miles and is an exhausting slog through four counties. The thought of it fills me with excitement, and great trepidation. I watched walkers trudging along the front in Weymouth, barely visible beneath bulging rucksacks, shoulders hunched, eyes to the ground, corners of their mouths dragged down by the amount of miles they had yet to go. We pootled. Took sandwiches and doggie treats for Harley and Tully, and had time to sit and watch the sea and partake of cream teas and pub lunches. It was glorious.

The nearest spot, and so naturally our first walk was to Osmington Mills, and a great little pub called the Smugglers Arms. Along a ridge we walked, a few steps and a long drop from the sea. Through woods and mud, and scout camps in green fields. Tully ran free; Harley, as free as his extendable lead would allow. Both loved to live life on the edge, seemingly teetering above the sea, ears flying; their own Titanic moment re-played over and over.

Osmington Mills was once remote, enveloped by little more than sea and hills. Surrounded by holiday makers and happy families as we were,  it took little imagination to feel the force of nature in this place; wild still in spirit. Remnants of wrecks emerged from the white caps below and our heads were filled to the brim with thoughts of smugglers, coastguards and contraband.

Emmanuel Carless, a previous landlord of the Smugglers Arms* was in cahoots with ‘French Peter’, a well known smuggler. Local legend tells how they got the better of a hapless Revenue Officer who doggedly tailed Peter. The landlord offered Peter gin instead of his usual brandy and pointed silently to the fireplace where the officer was hiding. Peter, saying he had caught a chill, asked the landlord if he would light the fire. The official was of course, smoked out, and the laughter of the locals and his fear of French Peter, lead him to accept the offered brandy and scarper!

From Osmington, on another day, the path lead to the dramatic chalk cliffs of White Note. Wilder, more rugged, more remote. Old coastguard cottages ranged in a line on the cliff top and nothing else – a vast expanse of sky and water, white and dark.

And on yet another day, from there to Durdle Door, a real rollercoaster of a walk. We trod paths walked by people since the Stone Age looking out over chalk stacks and rock arches carved by centuries of crashing waves. We passed Middle and West Bottom and eventually reached Scratchy Bottom (!) where Gabriel Oak’s over-enthusiastic sheepdog drove his flock over the cliff in the opening scene of the 1967 film version of  ‘Far From the Madding Crowd’.

At several points, when we dared, we peered over the edge, watching matchstick men and women walking matchstick dogs, the waves making momentary zig-zag patterns on the shore and dancing seaweed, swirling and curling like the hair of one of Jan Torop’s brides. And always the sound of the sea. A continuous swoosh of pebbles rolling, tumbling, moving. It was truly poetry in motion. We soaked it up, breathed it in and it made us feel alive. 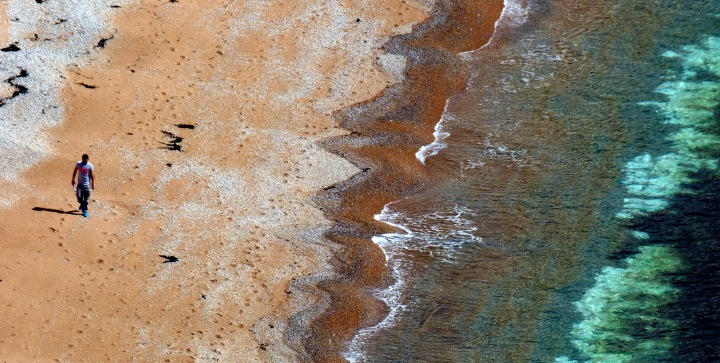 Durdle Door is perhaps the most well-known point on the south-west coast. Beautiful of course. But here the sea’s song was masked by beach bathers and sun seekers and we were pulled back to here and now. We wanted the solace of nature’s quiet – within reach just beyond the door. But that was for another day. 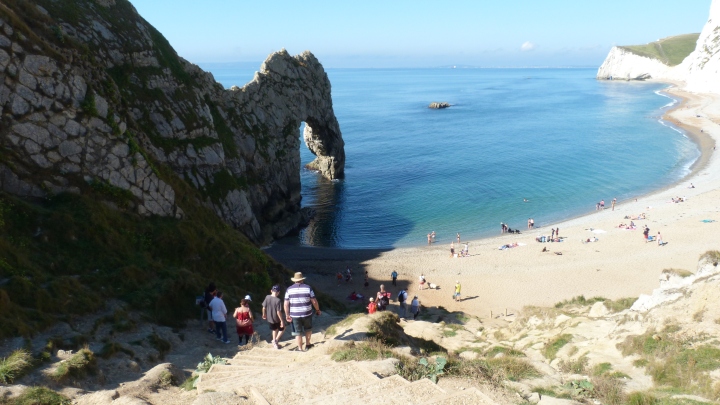 Next Time: The wild on the other side of the door.

14 thoughts on “Summer On The South West Coast.”