The farm nestled in a bend on the road – less of a road, more of a lane – narrow, leafy and green. The white-washed stone cottage sat hidden, surrounded by trees, fields, woods and wild flowers. I pushed open the metal gate, and Sally appeared on the doorstep as Merl and Mia, two cocker/springer spaniel crosses bounded towards us. Sally was a stranger, but we were to spend the next three weeks in her home, looking after the things that were most precious to her in all the world – the M’s.

She gave us a run-down of the routine, the dog’s personalities, and the farm – all at break-neck speed. We followed her around the small-holding and information came thick and fast. Willy and Nilly (the sheep) love to be in with the chooks during the day. The dogs will kill the chickens if they can. One of the hens is broody. The dogs sometimes chase the cats. The car is an automatic. The stream becomes a torrent if it rains a lot. We ate pizza for lunch (cooked in the aga) when Allan came home from work, walked the dogs together and then they were gone. The farm was ours for the next three weeks.

Mia – Merlin’s mama – and Merl were beautiful dogs, full of joy, energy and enthusiasm. On walks, they made gazelle-like leaps, bounced on all four paws and pranced and danced as they ran with a scent – squirrels, rabbits, birds; even wind ‘thingies’ on the beach, and bicycles on the track beside the cottage were fair game. Merl was directionless, running round and round, back and forth, constantly on the move. Mia still had it, but choose when to use it. She would stay close, looking pensive when Merl disappeared. ‘Don’t panic,’ Sally had told us, ‘hold your nerve, he will come back’. We trusted he would but responsibility can be a heavy weight.

Together we explored Carmarthenshire. Paxton’s Tower, a magnifient folly, was nearby. Dog walking for dummies. We drove up, and a yard from the car park we could let the dogs run. For them a sniff-fest. For us, gorgeous views over undulating green hills, and ruined castles. The tower was romantic (once we came across a canoodling couple), empty, but it filled me up, gave me space to breathe, and made me happy. Especially if combined with a visit to Wrights Food Emporium. A table just inside the door groaned under the weight of traditional British bakes – ginger cake with butterscotch sauce, baked sultana cheesecake, chocolate and cherry, coffee and brazil nut… I wanted to try them all but I just couldn’t. (But I did try).

Walking on the many nearby beaches was only slightly more strenuous. At Cefn Sidan over miles and miles of flat, firm sand, Merl chased seagulls and raced off to the dunes. Mia chased the ball, but never bought it back, and ran back and forth in the waves after kite surfers. They both swam in a little saltwater pool in the wreck of ‘La Jeune Emma‘. Lured onto the beach by wreckers lusting after the cargo of coffee, cotton, sugar, sherry, spices, rum and ginger; where dogs now paddle, thirteen people lost their lives. One of them only twelve years old and the niece of Napoleon Bonaparte. Rhossili, Llansteffan, Oxwich, Three Cliffs – all the beaches were gorgeous, a melting pot of sun, sky and sand. A vista of earth, water and air.

There are almost as many castles in the area as beaches – built either by the Welsh to repel the pesky English, or by the English to keep down the pesky Welsh – they sit atop limestone cliffs and beaches, lording it over rivers winding through vallies below. Now crumbling ruins, they stir thoughts of days long gone, when nobles could make or break kings. Mia and Merl, of course, much preferred the beaches, and hated being confined on leads. Merl strained and choked, tongue lolling, panting hard. I felt like a dog abuser, but could not risk letting him loose. The hillsides were dotted with sheep, and Merl will run for miles to chase a sheep. Eventually we left the M’s at home and clambered over battlements at Llansteffan, and at picked our way down damp, dark steps to an inky black cave at Carreg Cennen. We did not venture far inside; the place, once used as a dungeon, gave me chills that had nothing to do with temperature. 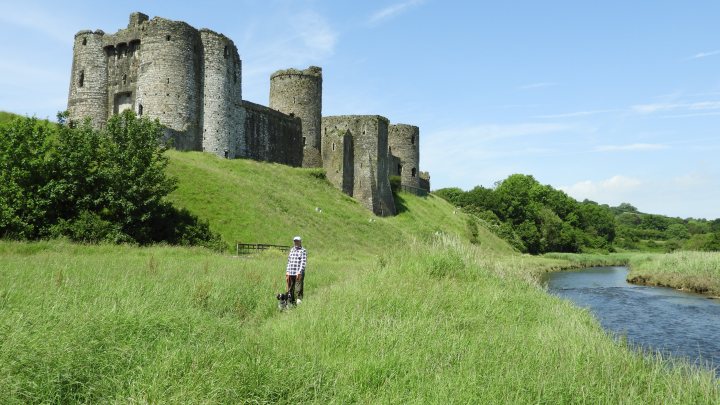 I couldn’t leave Mia and Merl home alone for long though. I felt too guilty. And there was so much we could enjoy together. But not Wright’s cakes. They were for me alone.

11 thoughts on “Carmarthenshire – Coast And Castles.”