Tenikwa is a wildlife rehabilitation and awareness centre close to South Africa’s touristy Garden Route. I thought long and hard about going there. All of their publicity seemed to concentrate on cats – wild cat experience – walking with cheetahs – and photo combos of all of the above. It felt a bit like exploitation. But I read a lot, kept an open mind and decided to go for it.  After a day working behind the scenes, I really loved the place and all reservations were gone.

Mandy, who set up the project with her husband, told me ‘rehabilitation is where our hearts lie’. Conservation and community awareness projects are a natural follow-on, and the rest – the cheetah walks and photographic tours –  are part of a business model set up to fund the heart and soul of Tenikwa: the rehabilitation of any injured, abandoned or displaced wild animal from along the Garden  Route. These animals are treated, cared for and whenever possible returned to the wild.

How did it all start? ‘We were big breeders – for collectors – of rare and exotic parrots’, Mandy began. ‘A bird is a lot more difficult to treat than a mammal. They mask injury. A limping bird in the wild is a dead one. People began to bring us sick and injured birds to look after’. Treating and caring for other species was a big learning curve – a mix of cooperation with various organisations/experts, learning from mistakes and trusting gut feeling. ‘There was the time I had a penguin. I thought penguins like water, so I put it under the shower to keep it wet. When I took it to the penguin rehab center the woman cried ‘what have you done’? It should have been kept warm and dry. And then there was the baby seal that I threw into a pool of water. Who would ever have thought that baby seals can’t swim? It just sank. I fished it out. You don’t think of googling ‘can baby seals swim’ but actually they have to learn that. The whole process was about gaining experience and trust’.

‘The cats are a draw to bring people to the center. South Africans are mad about lions but you’d never get a South African farmer to say anything good about a caracal. They are vermin to them’. (Small, stocky, very strong cats – they can kill as many as five sheep in one night). Visitors are taken past the caracals on the way to the lions and have a chance to learn something about them. ‘It’s the youngsters we aim at – adults have to make decisions based on economic realities – children don’t. And it’s working. We’ve had farmers bring caracal to us because of something they’ve heard here’.

I started working with Boniwe, a quiet, rounded black woman with a gentle manner and a lovely smile. She’d only been at Tenikwa nine months. As I helped her feed and medicate the injured and lost, I asked what she liked about working at Tenikwa. ‘I love animals and they love me. They follow in my footprint. Sometimes when they can’t find the leopard, they come and get me, and then he always comes’. ‘Did you know you had this gift before you came here?’, I asked, and she told me ‘Oh no, I didn’t know anything about animals. I thought I would work in the kitchen or something, but boss tell me, you have children, so you can do it’.

Our first task: force feeding a seagull it’s liquified dog food laced with antibiotic. Boniwe held him wrapped in a towel. He still pecked her. I threaded the tube down his throat and worried about it hurting him. ‘The tube is crinkled – feel here’, Boniwe told me, pinching the seagull’s chest between thumb and forefinger. After the seagull it was Milly the meerkat – fed with a syringe and her cut leg bathed. She peeped and squeaked as I dabbed at her with the cotton wool. It must’ve stung. We put her back in with her two friends. ‘They like shoelaces and massage’, Boniwe said, as she stroked the top of their heads.

Next up was the penguins. There were four in the enclosure – three permanent residents and one newcomer who was on medication and could perhaps still be rehabilitated. He had cuts on his chest which meant he could no longer go into the water or feed himself. It was hoped his scars would heal when he was stronger. We fed them all tablets hidden in big fat pilchards. Stuffing tablets into a dead fish is surprisingly difficult – even getting the mouth open was troublesome. Boniwe had the knack, but I put a tablet in the mouth, and it popped out of the throat. ‘Push it down with your little finger’, she told me. The penguins took a fish and ran away with it. ‘That’s how they eat’, Boniwe said. If one ran away, they all ran away – fish or no fish. A tablet dropped out on the floor. A seagull stole two fish while our backs were turned. It was like the Keystone Cops. ‘You don’t have to be in a hurry for this job’, said Beniwe as she called, coaxed and scolded the penguins. ‘Why you drop it’, she asked them, and then ‘fish, fish, fish’, in a sing-song voice, and finally that lovely South African word ‘eish’, uttered low and with a shake of the head when things just aren’t going your way. In the midst of all this pandemonium she had to remember which penguin had had his tablet and which not. For me, it was a case of ‘seen one penguin, seen ’em all’, but she knew. And then to my amazement, she said ‘and now for the difficult part’! She had to catch Scarpchest to force feed him four fish. At that moment, all four penguins jumped into the pool. ‘Oh they are very clever’, Beniwe laughed. I blocked one end of the pool, and by waving a towel Beniwe managed to manouvre them out. We got our bird when she threw the towel over him, and then it was four fish straight down the hatch – dispatched with a few gulps and shakes of the head. Unbelievably, Beniwe normally does all of this alone. ‘That’s why Crazee Cat Day is good – I get help’, she smiled.

And then the nicest task of the morning – feeding two baby bushbucks – a milk bottle each. ‘This you can do alone’, Beniwe told me, ‘but hold tight – they pull’. The buck, in a pre-release enclosure, darted forward out of the undergrowth and disappeared as soon as they’d drained the bottles. One had been found in a pool, almost drowned. The other had been rescued at the last moment from two small boys who were about to kill him. ‘People here have many meatless meals, so they are hunted for the pot’, Beniwe told me. ‘They use the hide for mats for the home, and the tail as a key-ring. They feel this shows pride in the fact that we’re South Africans’. 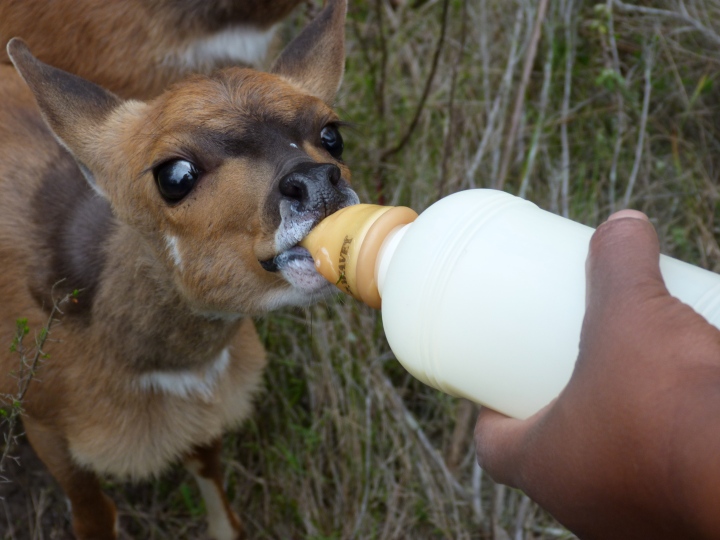 My day continued. A walk with Sizwe around the African wild cats – ranging from the small and domesticated that looked like they should be sitting on a rug in front of the fire, to leopard and white lion. Sizwe knew his stuff – all delivered with a huge smile and lots of wisecracks. ‘We have a party of school children coming in tomorrow, that is always rewarding’, he told me. He talked about the cats and their natures, their natural environments, humane trapping methods – by the end of it my head was spinning. 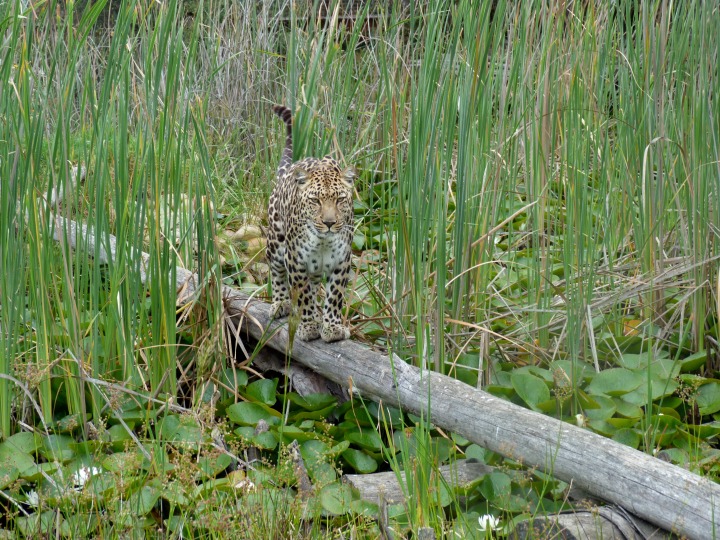 I needed fresh air and a walk and Thandy the cheetah joined us. This was a part of the experience that had worried me a little, but Thandy seemed to love it, purring loudly as she stalked the forest foot path in heavy rain. We let her walk loose, without harness or lead. She stopped often, lay down, looked around her, took her time. Sniffed new smells, nostrils flaring, head held high. It might be a tourist draw, but Thandy seemed more than satisfied.

So was I. I had a brilliant day at Tenikwa.

Crazee Cat Day is a whole day programme at Tenikwa to experience the daily running of a cat sanctuary and rehabilitation center.