I went on a Wednesday morning at 10.00. I thought there’d be noone there except me. I was wrong. A woman sat outside on a bench in the sun, a catty fabric bag at her feet. Four young English people rocked up, oohing and aahing at the cats sleeping on faux fur throws on sunlit window sills. Aaahs reached a cresendo when they realised the tiny little white cat had only one eye. The ancient Egyptians were crazy about them, the internet loves them, and now cat mania has hit the quiet streets of Amsterdam West.

Kopjes is home to eight very lucky felines. We were ushered into their lounge. Of course they ignored us. Curled into balls, chins touching paws, tails curved around bodies, licking paws, grooming whiskers, perched on table edges, slumbering in cane chairs, lounging langourously, they carried on with their important business of the day – doing nothing. Donnie, the oldest cat in the gang and a diabetic swung into action only when cake arrived. We’d been warned not to put plates on low tables, to lift our sweet treats high if he approached – and quickly. He’s been known to snatch and grab. He eyed my croissant but seemed to prefer my neighbour’s Red Velvet cake jumping up on a chair and nochalantly circumnavigating her handbag; He’s only been at Kopjes since November and still needs to learn that cake isn’t good for him. The eight are all rescue cats. Before Kopjes, Tiny, the baby of the kitty club and her sister Elonore lived in a house with thirty seven other moggies. Deprived of love and attention, Tiny suffered an infection so severe that her eye couldn’t be saved. But Kopjes is kitty heaven. Midori peeks out of a wooden box above our heads. A former street cat she no longer has to fight for food, and waits patiently for her next meal.

So the cats get love and more – but what do the humans get out of it? The Red Velvet cake lady had travelled 60km. The young English folk had seen it on Instagram. There were Germans, Americans and Japanese visitors. All cooing, laughing and smiling; sitting amongst walls covered with cat pictures, pot kitties on tables, Katopoly, catty jig-saw puzzles and books lauding the wanders of all things feline. One girl told me she had a cat at home – ‘but he’s a bit wild’ and she showed me her hands covered with scratches. Another lady photographed the ladders, bridges, tubes and boxes. ‘When I can’t walk anymore, I’ll have cats again and this is how I want my house to look’ she said. All stayed for their alloted two hours. Watching, playing, being slow. It was as if the cats were teaching us how to wind down, that the important business of the day really was doing nothing. It was fun and it was infectious. 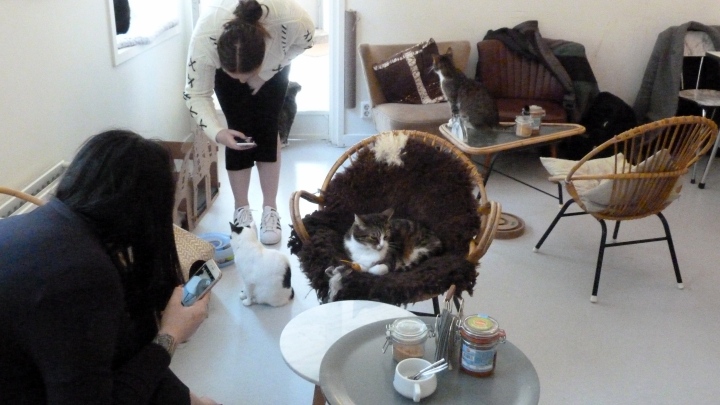 4 thoughts on “Cats, Coffee and Cake!”