Normally when we’re in the Charente we do nothing. We hang out with the animals and leave the place only to go to the supermarket. This time was a bit different. We discovered the two-hour French lunch-break and the menu du jour.

One day we popped out to buy a baguette. ‘Should we stop for coffee’, I asked Jim, even though the cafe was named Arsenic. A tiny terrace, two tables and occasionally a parasol, almost touched the main road. It was a pretty spot in spite of this, facing the church and opposite the Marie. We watched the world go by. Well, we watched the traffic go by. ‘The realisation that an articulated lorry might plough into us at any moment adds a certain frisson of excitement’, grumbled Jim. The waitress hung a chalk-written board outside. Lunch! Mmm – courgette/chevre crumble. We were sold. That’s how a baguette turned into coffee, which turned into three courses and wine. And that’s when we learned why the French need so long for lunch.

We travelled the nearby countryside looking for these little local cafes. The drives were as much a treat as the lunches. Caramel-coloured cattle grazing in long grass, tall skinny trees striding across fields, buttercups nestling at the base of their trunks and fanning out across myriad shades of green. Dilapidated barns, rusting roofs and wooden shards that were once doors, sometimes empty, sometimes filled with ploughs and tractors, discarded fence posts and the smaller stuff of farming life – ropes and buckets, rags and sacks. Almond trees and fruit orchards. White blossoms. Cross-marked crossroads. Ploughed fields curling down hillsides; new shoots peeping through. Always deserted villages. Shuttered buildings and pock-marked stone. There was evidence of people – school signs and parked cars, but there was never anyone on the street. Every hamlet and handful of houses had a war memorial – proudly displaying flowers – VE day had just passed. Verges filled with cow parsley, and once yellow irises reflected in brackish green water. Towers and turrets, chateaux, cafes and churches. Our sat. nav. took us on roads that were no more than tracks; skirting fields, we swirled through the countryside, wondering if the road would end before we arrived anywhere.

But we always made lunch service. We loved these long lazy repasts. Soup bought in a tureen. A small tart enclosed in melt-in-the-mouth pastry, once a cheese-board, always a dessert and a carafe of wine. Often the clientele was almost all English. The Charente is the new Dordogne. But once or twice it was just us and French workmen, drinking beer and smoking cigarettes. How they returned to work after that I’ll never know. Luckily, all we had to do was throw the ball for a few border collies. 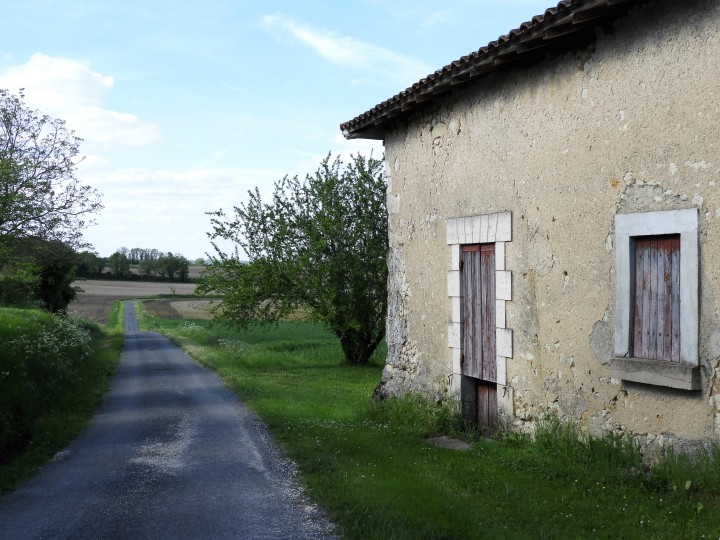