Learning To Drive In Amsterdam.

I have never been good at doing more than one thing at once. At any aerobics class, I’ll be at the back, stumbling blindly, legs and arms incapable of coordinated movement. In my one attempt at skiing, years back, I snow-ploughed down mountains while everyone else did nifty parallel turns, and still I managed to knock one poor soul down two times in quick succession. This did not bode well for my driving sessions in Amsterdam.

I’d tried to learn once before and it was a complete disaster. My teacher – more psychologist than instructor – dissected my personality with a fine toothcomb, and pulled no punches. A car ran into the back of me while I waited at traffic lights, and I knew I’d failed the test when the examiner wrenched the steering wheel from my hands, just moments before we would have disappeared under the wheels of an articulated lorry.  I gave up, vowing never to get behind the wheel again.

Fast forward fifteen years or so. Jim is fed up of being the sole driver. In two years time, he’ll reach his seventieth and hiring cars might prove more difficult. He tells me I’d enjoy driving (!) and it would be good for me. Mmm. But I concede it might be time to give it another go; and as we’re in Amsterdam for six months, now is as good a time as any.

For my first lesson I was picked up in de Pijp – a maze of narrow, often one-way streets, lined with cars on both sides. Cyclists weaved and wavered. I quivered. ‘If you can drive in Amsterdam, you can drive anywhere’, friends told me time and again. But I struggled. So much to think about. So many places to look. I couldn’t rid myself of the thought that I might kill or be killed. My instructor told me to speed up and then slow down and his constant refrain was ‘look further ahead, look differently, look, look, look’. Once I almost drove into a bollard. He looked up from his smartphone just in time to slam his foot on the brake. ‘Into first gear’, he said with a slightly raised voice, as I bumped over a street entrance – ‘unless you want to fly’. He was patient, encouraging and friendly, but for months, learning to drive was a source of misery, stress and self confrontation.

Sometimes you think you’ve grown in life, moved forward, and then the universe throws something at you and you’re right back where you started. Except you’re not. It’s worse – because you thought things had changed and then realise they hadn’t. Insecurity overwhelmed me. ‘Why can’t I do it’, wailed one of the nurses in a recent ‘Call The Midwives’ episode, as she thumped the wheel in frustration. I think of that scene often. 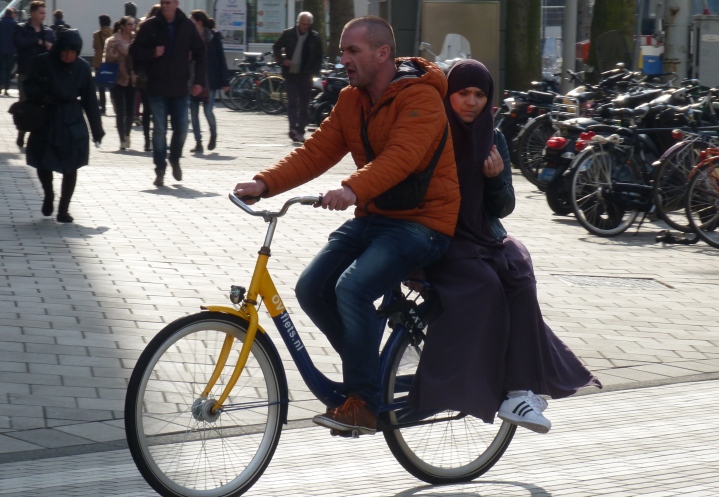 I studied the theory and failed practice exam after exam. Friends tried to buck me up. I heard driving-lesson stories galore. Like the one about the instructor who always raised his arm as he was about to ask for an emergency stop. Congratulating himself on his anticipation skills, my friend slammed on the brake as his teacher once again lifted his arm; except the teacher had no such intention, wasn’t wearing his seatbelt and broke his nose on the dashboard. Jim actually had to give hand signals on his test – sticking his arm straight out the window to turn right and circling it windmill style to turn left!

No matter how people try to encourage you, it matters not a jot, unless you believe in yourself. Applying logic is also useless. Feelings pay no attention to common sense. I thought I’d never get the hang of it, but I kept plugging away and somehow I turned a corner. I passed the theory exam and the mock test went well. During the last month, I actually began to feel that I could do it. I got the hang of having eyes in the back of my head and everywhere else. ‘Unless you do anything really stupid, you’ll be fine’, my instructor told me.

‘Eat a banana before the test – it’ll make you sharp’, he went on! I hate bananas but maybe I should have forced one down. I failed.

I know it’s not the end of the world. ‘How long have you not had a driving licence’, my instructor asked, trying to be helpful. Fifty five years is the answer. He’s right – it’s not a matter of life and death. And in November I’ll be back to try again. At some point I’ll be behind the wheel and I really will like driving in my car!